The Department of Communication Arts is delighted to announce that Professor Eric Hoyt was awarded a prestigious Vilas Associates Award. The award recognizes new and on-going research of the highest quality and significance, and offers the awardee summer salary support and research funding. 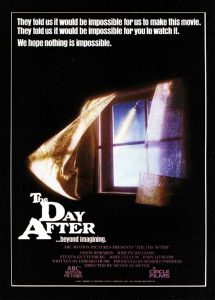 Professor Hoyt won for a proposed project entitled “The Day After: Network Television’s Nuclear Movie Event.” Hoyt will explore the production and reception histories of one of television’s most-watched films, The Day After. When it was broadcast on ABC on November 20, 1983, The Day After attracted an estimated 100 million viewers, with its chilling and cautionary tale of nuclear war and devastation.

LA Times critic Howard Rosenberg posed at the time that it “may be the most important movie ever made,” based on its power and reach. Filmed and set in Kansas, The Day After will now have a Kansas boy writing the definitive account of precisely why and how it was important, and of the opportunities and limitations for the role that television can play in social change.

Hoyt plans to have the project in book form by the movie’s 40th anniversary in 2023. It will follow his earlier book Hollywood Vault: Film Libraries before Home Video (University of California Press, 2014), his forthcoming Ink-Stained Hollywood: The Triumph of American Cinema’s Press (University of California Press, 2022), and his three co-edited collections, Saving New Sounds: Podcast Preservation and Historiography (University of Michigan Press, 2021), The Arclight Guidebook to Media History and the Digital Humanities (Falmer, 2016), and Hollywood and the Law (BFI/Palgrave, 2015).