As a child growing up in northwest Arkansas, Comm Arts film graduate student Lance St. Laurent was enamored of trivia, considering himself “a person full of random factoids and knowledge.” In 7th grade, a classmate recommended that he join the school’s Quiz Bowl. Brand new to the team, St. Laurent recognized his skill level when he immediately did better than all his teammates. Continuing with Quiz Bowl into high school, he served as team captain, and in solo competition became the state MVP for Arkansas.

St. Laurent’s love of Jeopardy! was nurtured by visits to California to see his grandmother Susan, who would provide friendly competition each time they watched the show together, motivating him to keep improving his trivia skills. 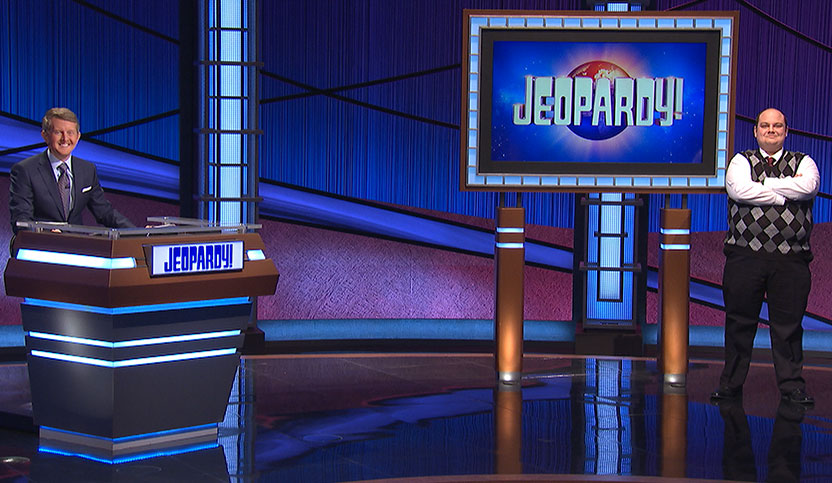 Potential Jeopardy! contestants must clear several bars just to be considered for the show. The first is a 50 question test, offered at a precise day and time. Contestants have just 15 seconds to answer each question. If your score is good, there’s a second test (currently run over web conference) and passing that, you then participate in a mock game, where you demonstrate your understanding of the game’s flow, and give the producers a sense of how you would fare on the show. If the mock game goes well, you’re added to a pool of contestants, where you may be called up anytime in the next 10 months.

St. Laurent began taking the first test as an undergrad, about eight years ago. After many attempts, he cleared all hurdles, joined the contestant pool in fall 2020, and filmed his episode December 15.

Chosen to appear just a few weeks after the passing of longtime host Alex Trebek, St. Laurent was unsure how the show would be run. All Star contestant Ken Jennings served as host, and strict Covid-19 regulations were in place. As a film aficionado, St. Laurent was very curious how the show is produced. He learned:

He says it was a great experience overall.

So you want to appear on Jeopardy!(?)

If you are serious about following in St. Laurent’s footsteps, here is what he recommends to boost your chances:

Sadly, St. Laurent’s grandmother Susan passed away more than one year ago, but he knows she would be very proud of his participation in the show.