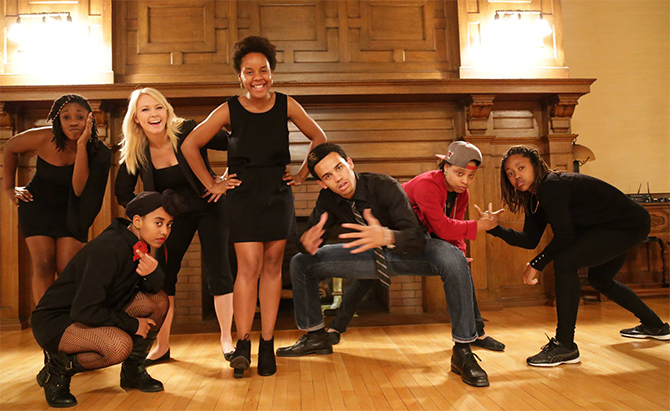 I sat down with Communication Arts undergraduate and The Bellhops member Taylor Scott last week to talk about the performance ensemble’s upcoming show, “Honey in my Tea.” The show will be in Promenade Hall of the Overture Center on April 24th at 6PM and April 25th at 9PM in conjunction with the Line Breaks Festival. Taylor is the lead organizer, songwriter, and singer of “Honey in my Tea,” though the performance ensemble involves over 20 singers, songwriters, musicians, poets, dancers, and visual artists in its entirety. The 60-minute show is composed of original songs and poems that take musical cue from blues, hip-hop, jazz, and spoken word traditions to communicate about themes of race, womanhood, and survival in the United States.

Can you describe the structure and inspiration for this performance?

The performance is a collage of narratives that are very different, each its own thing, very vibrant. For example, one of the pieces imitates a folk song and you could literally take it and place it within the 1920s and 1930s; you can hear that time period within the lyrics and within the sentiments of the song. And then you have very bitter pieces, and pieces that are in your face. There is a monologue called “Peaches” performed by Ajanae Dawkins and in that piece she explains her bitterness, why she is the way she is, and it’s all a reaction to her situation as a Black woman in this society.

This entire show screams Audre Lorde’s Sister Outsider, screams Billie Holiday’s “Strange Fruit,” screams Nina Simone’s “Four Women,” and Angela Davis’ speech, “Angela’s Homecoming” from 1972. The themes within those pieces come out in this performance, and though they’re all from different time periods, what all of these texts show together is that things have not changed; people have just stopped watching.

What point does this performance try to convey to the audience?

All of the songs are written to reflect our present, waking selves. I want the audience to see that for what it is, and to be like “she put herself in that song, she’s a person, and she has a story.”

What was the process of conceptualizing, writing, and composing this performance?

I actually wrote my first full song and performed it on stage only about a year ago! The song, “The Book of Job,” was a dedication to my First Wave cohort brother John Vietnam who passed away in 2012. Before that, I wrote poems and I was notorious for writing hooks! I would be like, “ohh, that’s a really good hook,” and then it would be stuck in my head. And then I just never wrote verses. I was just the hook writer! That song snowballed into another song, and another song, and another song, and I’ve been writing songs on a consistent basis ever since.

With this show I get inspired by the things around me; or it’s a certain sadness that comes when I turn on the television and I see Trayvon Martin, or I hear about someone from my high school or middle school who is in trouble.

But I didn’t write all of the songs within the show. I think if I would have it would be a boring show! It’s so spicy because there are so many different writers with different styles and voices on this project.

In terms of the music we just kind of did what we felt. It was supposed to be jazz and then that didn’t really happen. As we were composing, every song that came out was like, “uhhhh, this is the blues.” This one? “Blues.” So the jazz thing never really happened. It would have been nice, but I’m content, I’m satisfied with the blues because it means that the show is organic if it turned into something it wasn’t originally supposed to be.

It’s a creative way to capture everybody. It’s a feeling and everyone gets to be let in. Even the most cryptic writers, Bob Dylan for example, you could listen to him over and over again and feel like you know something about him, yourself, or the world we live in from his songs. I think that’s what draws me to these forms—the ability to capture and be let into so many stories, ideas, stand-points, to be let into so many worlds.

Interview by Communication Arts Assistant Professor Dr. Sara McKinnon, faculty advisor for the “Honey in my Tea” performance. Sara also led an independent study this semester with a small group from the ensemble to analyze and discuss the rhetoric of Black women’s music, poetry and performance.