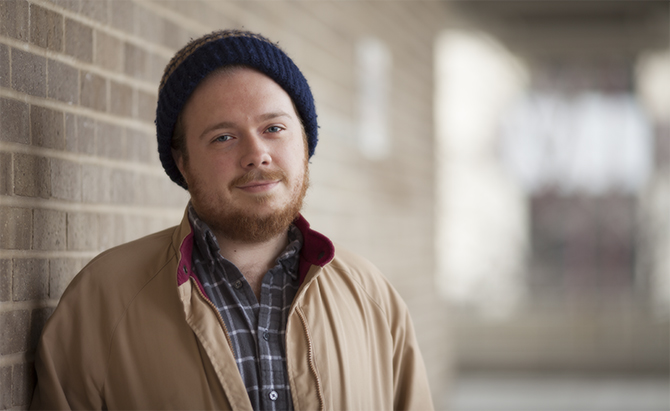 This week I sat down with filmmaker Brandon Colvin to discuss his new film Sabbatical, his process, and the Wisconsin Film Festival, which begins today, Thursday, April 3rd. Brandon Colvin is a graduate student of film in Communication Arts.

Describe briefly the synopsis of Sabbatical:

It’s about a middle-aged professor who is scheduled to go on sabbatical to work on a book, but just before it begins, his mother has a stroke and falls ill. So he decides to spend his sabbatical back at home with her as he works, sort of taking care of her while working on his book. That all kind of happens actually before the story even gets going, but that’s the basic situation that sets up the narrative.

How would you describe your filmmaking style, or in other words, what are your goals as a filmmaker, if you have any?

Uhmmm, goals as a filmmaker. My goals as a filmmaker are sort of to–well, they’re always to try to push myself to do things that I don’t know are going to work… I guess the approach to storytelling that I have, which is not conventional realist or naturalistic storytelling, is much more like thinking of every single part of the story as something that’s potentially expressive… I think there are ways you can subtly abstract and modify behavior and framing and intonation of voices to create a kind of interaction that gets more toward an emotional core rather than just an attempt to recreate reality or capture how people really talk. I mean, I think that’s probably the opposite of what I’m interested in–and I love movies that do that–but for myself as a filmmaker, that’s not what I want to do.

So, in essence are you restricting the creative routes you can take? Has that led to any creative revelations?

Yeah, definitely. I think a lot of artists would say this, but when you give yourself parameters, it actually makes you do things you wouldn’t’ve thought of. And so I definitely have rules when I make things. Before I started writing Sabbatical, I sort of remember writing down eight rules. I don’t remember what they are–you always end up breaking them or bending them in some degree–but they do make you avoid your first thought. And I know that there are some people, creative people, who say “First thought, best thought,” but for me it’s more like “First thought, most mundane thought,” or something. *laughs*

If you create rules, even if you end up at something similar to that first thought, it makes you get there in a circuitous way where you start attaching new little bits to it and by the time you get back to the first thought, it’s different, or–fresh. And that’s sort of the goal for me.

Your first film, Frames, follows two high schoolers. And Sabbatical is also centered around academia. Does it just so happen your experience has informed the content of your two films so far, or is there some other interest in education as a setting?

I don’t know. There’s the “write what you know” thing, which for me is often less about writing characters I know than writing about spaces that I know. So I think in some ways that’s part of it. And, you know, maybe it comes down to being an academic, which is sort of isolating in a lot of ways, and so far the characters I’ve written about are isolated characters.

Both films have elements of autobiography in them. In Frames, it’s much more about emotional hangups and things I’m very critical about… but Sabbatical is more directly autobiographical in a certain way. And the next movie that I’m writing is also about academia, *laughs* about a biology professor and his grad students, and they’re doing field work in the summer–but it’s a comedy.

Do you find yourself developing these ideas in tandem with being in production on your films?

It seems your turn-around time has been pretty quick.

Yeah, it’s pretty quick. I actually had the initial idea for Sabbatical before I even shot Frames, which came from seeing Robert Beavers’s movie Pitcher of Colored Light (2007). It’s an avant-garde film. I saw that at the 2011 Wisconsin Film Festival, which was three months before we shot Frames. We were in pre-production then. And then this new one I actually got the idea for during the cast-crew dinner we had for Sabbatical at Brickhouse BBQ. Robert Longstreet, Kentucker, and I were sitting around and they were saying “You should do a comedy,” and I was like “I’ve been wanting to do a comedy!” and we just started spitballing and developed the bare outline of what it was going to be.

What has your filmmaking experience been like in Madison?

I haven’t done any shooting elsewhere, really. Frames was the first thing I ever made where I wasn’t the only crewperson. It’s the only thing I’ve made besides, like, ridiculous high school shorts with my parents’ video camera. So, it’s been easy, and I only know it’s been easy because of hearing about other people’s difficulties in different areas. Especially people shooting in New York and how bureaucratic that can be.

But it’s really easy to shoot in Madison. For the most part people are really chill and nice–and that’s kind of the stereotype of Wisconsinites, that they’re extremely nice–but they have all been extremely nice. Like stuff, you know, where we’ll ask to use a location and we’ll offer to pay for it and they’ll refuse payment. *laughs* I don’t know how many people deal with that situation specifically, but we’ve definitely dealt with it. And just in terms of being in Madison, the community of people associated with the University and with the Department [of Communication Arts] especially have really facilitated all the stuff that I have done, from former students working on the projects, to fellow grad students or professors letting me use their homes or cars or whatever whenever I need to. So everyone’s been super accommodating.

Sabbatical has two screenings at the film festival this year. Have you been to other film festivals with your films and how do they differ from the Wisconsin Film Festival?

Frames showed at a couple other festivals but I couldn’t go to them. But I went to one in Kentucky that was a really awful experience, just because their infrastructure was awful and the screening environment was pretty poor. But, I mean, Wisconsin is world-class, and the audiences are world-class. The fact that it’s the hometown festival for the movie is really fantastic because it’s a festival that I would be happy to play in even if I weren’t in Madison. Even if I lived in Texas and my film got into the Wisconsin Film Festival, I would be stoked. And the audiences here really come out for local work, which is always fun.

Brandon Colvin is the writer, director, and producer of Sabbatical, which will have its world premiere at the 2014 Wisconsin Film Festival. The first screening is 7:00pm on Friday, April 4th and the second screening is 2:00pm on Monday, April 7th. Brandon Colvin will be in attendance for a Q&A session, along with star Robert Longstreet, cinematographer Aaron Granat, and editor/producer Tony Oswald.