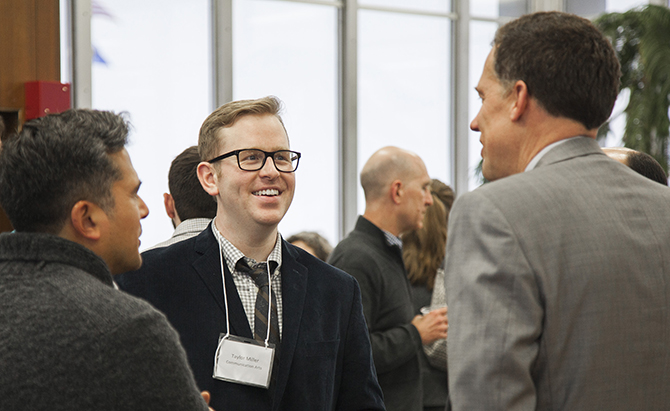 The teaching assistants of the Department of Communication Arts have always prided themselves on expansive knowledge and dedicated instruction. Yet few, if any, have ever been officially recognized for their efforts on the campus level until now. On Tuesday, February 7th, Communication Arts graduate student Taylor Miller was among the recipients of the 2016 Campus-Wide Teaching Assistant Awards. Specifically, Miller received the Capstone PhD Teaching Award, one of only five to do so from over 2,000 teaching assistants working at UW-Madison.

With funding support from the College of Letters & Science, the awards are given each year by the Graduate School after a nomination process. The Capstone Award recognizes PhD students who have performed as outstanding teaching assistants throughout their UW-Madison tenure. In his time in Communication Arts, Miller has taught five different courses: CA 155 – Introduction to Digital Media Production, CA 346 – Critical Internet Studies, CA 351 – Television Industries, CA 451 – Television Criticism, and CA 609 – Essential Digital Media Production for Graduate Students. The list is extensive, and given the fact he taught some courses for two and three semesters, it encompasses nearly his entire time at the university. And yet, the list does not fully convey his impact on the department and the classroom. For that, we turn to comments from faculty and students.

Professor Eric Hoyt said, “Taylor is a fantastic collaborator and TA. He is excellent at providing students with conceptual and technical instruction, coaching them through creative projects, and assessing assignments and giving feedback. But I think what makes Taylor special is the energy and creativity he brings to the table. He goes out of his way to create memorable and meaningful experiences for students.”

“His efforts will long outlive his time here, as his students remember him and value greatly what he taught them, and he challenged his peers who’ll succeed him here to be the best teachers they could be,” said Professor Jonathan Gray.

And comments from his former students might be the most telling:

“If I could have Taylor as my TA for every class, I would.”

“Honestly, the best teacher I’ve ever had. He made me want to be in the TV industry and made me feel confident in majoring in Communication Arts. Hopefully everyone can take a class with him someday!”

“He will make an AWESOME professor!”

We congratulate Taylor on earning this well-deserved award. Taylor was recently hired as a tenure-track Assistant Professor of Entertainment and Media Studies at University of Georgia, starting Fall 2017, and we have no doubt that he will indeed make and awesome professor.