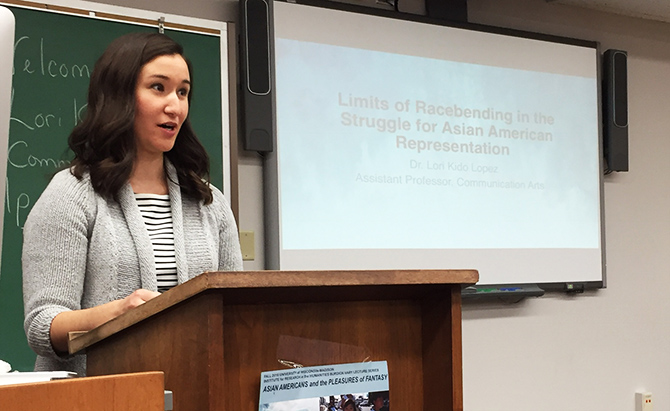 On December 8th, Communication Arts Assistant Professor Lori Kido Lopez gave her talk Limits of Racebending in the Struggle for Asian American Representation in Helen C. White Hall. The talk was part of the Burdick-Vary Lecture Series Asian Americans and the Pleasures of Fantasy sponsored by the Institute for Research in the Humanities. Professor Lopez is currently a Race, Ethnicity and Indigineity Fellow at the institute, where she has researched race and media throughout the semester. The talk was well-attended with nearly 100 audience members from all around campus. To learn more about her talk and the rest of the lecture series, I asked Professor Lopez a few questions.

What was the overall goal of the lecture series?

The central question was to explore the idea of responding with pleasure (rather than just criticism) to images of Asian Americans, even those that we might assess to be racist. So for instance, Christine Yano talked about how much Asian Americans are fans of Hello Kitty, a character who is often said to be the epitome of the meek and voiceless Asian woman, she literally doesn’t even have a mouth! And Leslie Bow talked about how she is often drawn to household objects shaped like cute Asian caricatures, even if she knows they’re offensive, leading her to ask how we negotiate how complicated our feelings of attraction can be.

And what was your talk about?

My talk was the last of the series, and concluded by saying that in media studies we know that audiences interpret texts (even what we might consider “bad texts”) in many different ways. But my own research focuses on the question of what we do in response—how are our feelings converted into activism, and should they be? When we’re looking at images of racial minorities, figuring out how we want to respond in order to bring about social justice is even more complicated than just sorting out our own individual responses.

How did you go about answering those questions?

I looked at the example of The Last Airbender. I analyzed some of the arguments that Asian American activists made when the cartoon Avatar: The Last Airbender was made into a live action film. A lot of fans who loved the cartoon thought that it was based on an Asian fantasy world, but then the film’s cast starred white actors as the three heroes. These fans were upset that this casting had taken roles away from Asian American actors (yet again, since this happens all the time in Hollywood), so they organized a huge boycott of the movie. In my talk I looked at the ways that their arguments made a lot of sense, because Asian Americans face so much racism with regard to media representations. But I also looked at how hard it can be to make claims about which characters are Asian, or which actors should be allowed to play Asians on screen, since Asian America is such a diverse collective.

What do you hope your audience took away with them after the talk?

What I was hoping to convey to the audience was that you can make good arguments to explain a wide variety of responses to media, whether it’s loving or hating a text. And this is what makes activism so hard — issues of racial representation can be really tricky to untangle, but it’s too important of an issue to just let slide. So I try to give audience members analytical tools for making sense of when racism is happening in the media, as well as what to watch out for.