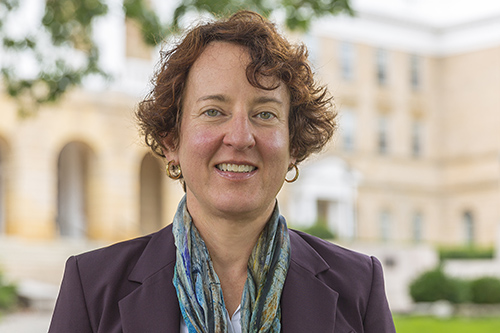 My scholarship focuses on rhetoric, history, gender, and political culture. My first book, Signatures of Citizenship: Petitioning, Antislavery, and Women’s Political Identity (University of North Carolina Press, 2003) explores how American women who petitioned against slavery not only contributed to the abolitionist movement, but also renegotiated their status as citizens. In my present book project, Esther’s Afterlives: Narratives of Self, Struggle, and Survival, I curate and analyze appropriations of the Old Testament Book of Esther to discover and articulate why this ancient tale possesses such enduring appeal. I approach the Book of Esther as rhetorical theory and instruction which, in narrative form, recommends persuasive strategies and rhetorical ethics for peoples struggling to survive within structures of oppression.

As Associate Dean for Arts and Humanities in the College of Letters & Science since June 2011, I have lead a division of 16 departments and 22 centers and institutes, including the Institute for Research in the Humanities and the Center for the Humanities. My responsibilities include advocating for the arts and humanities; catalyzing faculty research and the securing of external grants and fellowships; faculty hiring; oversight of faculty mentoring and the tenure process; budgetary oversight and guidance for units; program review; curricular development; handling faculty, staff, graduate student, and undergraduate student disciplinary issues; and guiding and mentoring chairs and directors. Major accomplishments during my tenure in this position include working with faculty to restructure and merge departments into compelling new units that re-energize faculty research and teaching, provide better staffing, and attract more students. Examples of these successes include the new trans-Asian Asian Languages and Cultures Department https://alc.wisc.edu/about-us/ and the new multi-disciplinary Language Sciences  https://langsci.wisc.edu. Another great success is Constellations, a Mellon-funded program that charts pathways for students from all corners of the campus to and through the humanities, increasing humanities enrollments and engagement. https://constellations.ls.wisc.edu

From 2011 to 2018, I served as Associate Dean for Advancement for the College of Letters & Science, the largest academic division of the University of Wisconsin-Madison, which has roughly 200,000 living alumni. I played a significant role in transitioning a public institution into a public-private venture with a robust development structure. I worked hand-in-glove with the UW Foundation and UW Alumni Association to build an office of strategic communications and donor engagement in the college to support development work conducted by directors of development, the chancellor, the dean, and department chairs. I served in a group appointed by the Foundation to provide input for selecting and implementing new CRM tool as the university prepared for a comprehensive campaign that is now ending after having raised $3.2 billion. At the same time, I worked with Letters & Science chairs, directors, faculty, and staff to understand and accept this sea change and to learn how to do development work, including forming departmental boards of visitors. The L&S advancement team and I strengthened the format of L&S Board of Visitor meetings and assisted the dean in transforming the group from a board of friends to a board of philanthropists. Traveling with UW Foundation development directors, I visited alumni and donors throughout the U.S., in France, Israel, and in China, hosting events in Chicago, New York, Las Vegas, and Boston, and engaged alumni at in the Chancellor’s box at football, basketball, and hockey games.

As Interim Director of the Division of the Arts for UW-Madison, I report to the Provost and am charged with leading a unit of 15 staff members working to unite and amplify the arts, which are spread across three schools and colleges. The major programs of the Division of the Arts include a residential learning community called The Studio, the Interdisciplinary Artist in Residence Program, the Creative Arts Awards, Arts@UW communication and marketing of the UW-Madison arts as a whole, the Madison Early Music Festival, and the Wisconsin Film Festival, which is the largest university film festival in the United States, screening 150 films over 8 days in 5 venues seen in person by 30,000 viewers. My charge as Interim Director is to make sure these stellar programs are run effectively, improve the division’s morale and operations, serve as an advocate for the arts, and, importantly, to lead planning efforts to restructure this campus unit. https://news.wisc.edu/susan-zaeske-named-interim-director-of-division-of-the-arts/