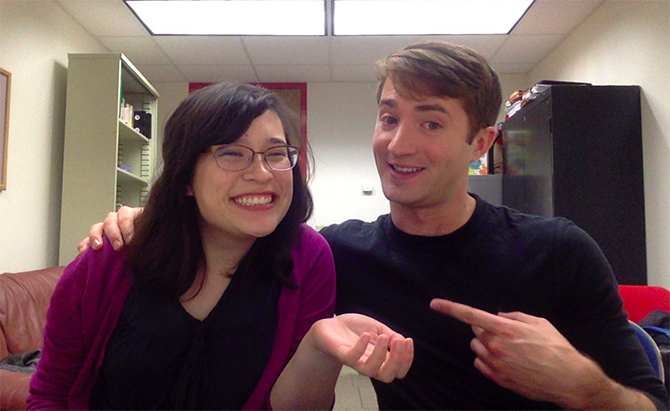 The center seeks to further the legacy of Fred Rogers, and one way it does this is through the Early Career Fellows program. The program supports up-and-coming creatives and producers who are interested in early development and working in children’s media. By adding Alanna and Alex to the program, the center has awarded the grant to researchers for the first time.

Initially, the graduate students thought to apply separately, but soon realized their applications would basically be the same. They inquired about applying as a pair and were given permission as long as they split the award.

Alex said, “I think we work really well just in terms of bouncing ideas off each other. Her strengths are kind of my weaknesses, and hopefully vice-versa. I don’t know if she’ll say that or not.” [Laughter]

Professor Louise Mares, who advised the writing of their proposal, added, “In general in the [Comm Sci] labs… there’s this emphasis on collaborating and working as a team, so this is kind of an outgrowth both of Alanna’s interests and Alex’s interests… I think it made perfect sense for them to do it together.”

Beginning with a conference in June, the program will last a year. In that time, Alanna and Alex will work with four different versions of a television narrative, with each version adding a level of interactivity. They will test the different versions of the program to see which are most effective, what pro-social outcomes are achieved, and how well children recognize the emotions of characters within the story. The final goal will be to develop the program into a resource for educators and parents alike.

When speaking about the work Alanna and Alex will be doing, Prof. Mares said it will be “bridging the gap between academic work and real-world applications. I think that’s a really cool feature of this project.”