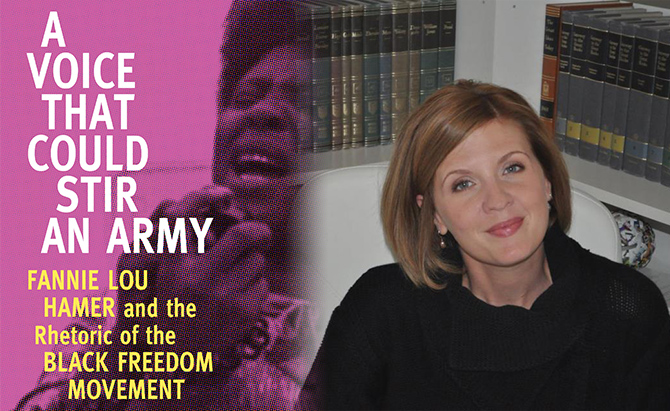 Maegan Parker Brooks recently published her book A Voice that Could Stir an Army. She received her PhD in Communication Arts from the University of Wisconsin-Madison in 2009 and was an advisee of Sue Zaeske. We congratulate Dr. Brooks on her accomplishment, and include her book announcement here:

A VOICE THAT COULD STIR AN ARMY: FANNIE LOU HAMER AND THE RHETORIC OF THE BLACK FREEDOM MOVEMENT

THE FIRST SCHOLARLY ANALYSIS OF THE INSPIRATIONAL ACTIVIST’S PROFOUND SPEECHES

A sharecropper, a warrior, and a truth-telling prophet, Fannie Lou Hamer (1917-1977) stands as a powerful symbol not only of the 1960s black freedom movement, but also of the enduring human struggle against oppression. A Voice That Could Stir an Army is a rhetorical biography that tells the story of Hamer’s life by focusing on how she employed symbols– images, words, and even material objects such as the ballot, food, and clothing–to construct persuasive public personae, to influence audiences, and to effect social change.

Drawing upon dozens of newly recovered Hamer texts and recent interviews with Hamer’s friends, family, and fellow activists, Maegan Parker Brooks moves chronologically through Hamer’s life. Brooks recounts Hamer’s early influences, her intersection with the black freedom movement, and her rise to prominence at the 1964 Democratic National Convention. Brooks also considers Hamer’s lesser-known contributions to the fight against poverty and to feminist politics before analyzing how Hamer is remembered posthumously. The book concludes by emphasizing what remains rhetorical about Hamer’s biography, using the 2012 statue and museum dedication in Hamer’s hometown of Ruleville, Mississippi, to examine the larger social, political, and historiographical implications of her legacy.

The sustained consideration of Hamer’s wide-ranging use of symbols and the reconstruction of her legacy provided within the pages of A Voice That Could Stir an Army enrich understanding of this key historical figure. This book also demonstrates how rhetorical analysis complements historical reconstruction to explain the dynamics of how social movements actually operate.

MAEGAN PARKER BROOKS, Denver, Colorado, is a member of the National Fannie Lou Hamer Statue and Education Fund Committee. She is a lead researcher on a forthcoming documentary about Hamer, and she recently coedited, with Davis W. Houck, The Speeches of Fannie Lou Hamer: To Tell It Like It Is (published by the University Press of Mississippi).