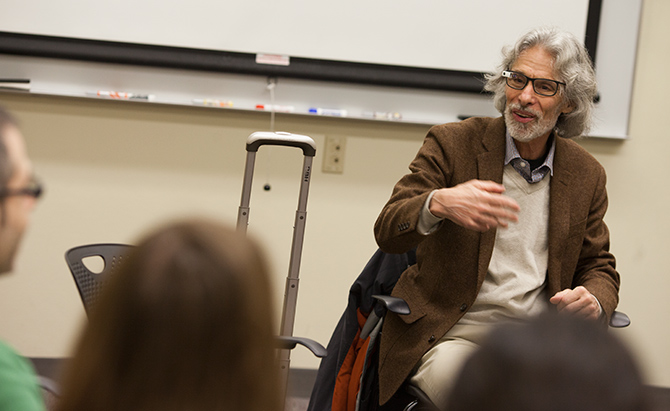 On Friday, Bob Mankoff visited with the students of Professor Catalina Toma’s course, CA 970: Seminar in Computer-Mediated Communication. Mankoff is the cartoon editor for The New Yorker and stopped by the class to discuss humor and humor’s role in communication.

Within moments of arriving, Mankoff was demoing his Google Glass to the classroom. He likes to use it as a conversation starter because people are naturally curious about it. Plus, it allows him to record video of conversations, an important tool for observing one of his ongoing interests: how does laughter function in ordinary conversation?

Laughter as a part of communication was one topic among many in the all-too-short hour-long discussion with the cartoon editor. With engrossing fluidity, Mankoff scratched the surface of many topics on humor, including but not limited to: the structure of comics and the element of surprise, the evolutionary roots of humor, humor’s reliance on stereotypes (for better or for worse), political correctness and humor, and the localization of humor.

Mankoff was incredibly open and engaging, going so far as to invite everyone to email him more questions to continue the conversation outside of the discussion. Before long, he departed for another commitment, but not before the class asked him to send them the videos he took with his Google Glass.