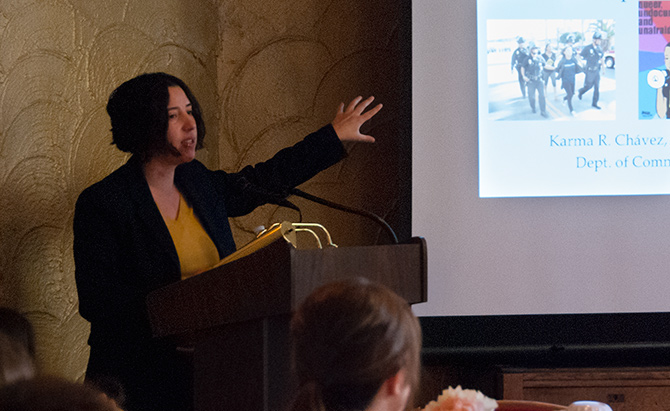 Professor Karma Chávez is one of three scholars to be selected as an NCA-Forum Centennial Awards recipient. Alongside Della Pollock of UNC, Chapel Hill and Leslie Baxter of University of Iowa, she will be honored by the National Communication Association Forum for her commitment to “practical engagement in the field of Communication and beyond” at the NCA Convention in Chicago held November 20th-23rd.

Professor Chávez’s colleague, Professor Rob Asen, had this to say about her:

Karma Chávez is incredibly deserving of an NCA Centennial Award for social engagement. Professor Chávez is better than anyone in the discipline at enabling students to see the connections between the ideas discussed in the classroom and their application in society at large. In making these connections, she helps students appreciate the importance of what they learn. But Professor Chávez doesn’t stop there. She has committed herself to making the world a better place. Professor Chávez engages in what academics like to call praxis—she draws on scholarship to better understand and act in the world. Professor Chávez imagines a brighter future and works to make it happen.

Karma Chávez is the kind of scholar I want to be. That is to say, she’s the kind of person I want to be—one whose work is invested in making people’s lives better in real, material ways, via her scholarship and her service. Professor Chávez demonstrates tremendous care for others, in the classroom, in her roles as mentor, in the local Madison community, and in her engagement with national movements. She is as pleased to set up chairs and make the coffee for a grassroots-level advocacy effort as she is to engage with our field’s top scholars in deep theoretical conversation because, for her, scholarship is both of these things, always, at the same time. It is a privilege to work with her.

Professor Chávez has received many prestigious accolades lately, and the Centennial Award is another tremendous honor for a bright career of scholarship.