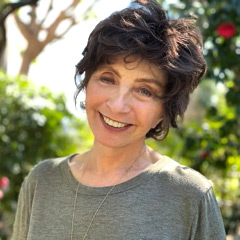 As a freshman at UW-Madison, Lynzee Klingman planned to major in math, but walking to early a.m. calculus classes in sub-zero Wisconsin weather proved too much, so she focused instead on history, studying with influential professors like George Mosse and William Appleton Williams.

Klingman remembers the campus in the 1960s as a vibrant place, “rich with great music, politics and parties.” At that time, Klingman nurtured a lifetime love of movies by attending the weekly UW-Madison Film Society screenings of classic U.S. and European films at Memorial Union.

Starting her junior year abroad in Paris, Klingman had to return home to New York City due to family challenges, and ended up getting her degree in history at Columbia University. Klingman later met a film editor and was happy to learn that one could make a living working on films. Looking for a job in the industry, she was repeatedly told “we don’t hire women because you can’t carry a lot of [film] cans,” and that men in the workplace didn’t want to clean up their rude on-the-job language. But she eventually connected with an editor of industrial, commercial, and how-to films who needed someone willing to take on a range of tasks, from acting as receptionist to maintaining equipment and cutting negatives, a difficult and exacting process in film post-production.

Through trial and error, persistence, and grit, Klingman developed a feel for film editing, working on early films like In The Year of the Pig and Hearts and Minds, both Academy Award-nominated documentaries about the Vietnam War; the latter won Best Documentary in 1975. As a politically active young adult in the 60s and 70s, Klingman is especially proud of her work, saying, “I made little money working on these films, but felt good doing something I believed in.”

She has also enjoyed being an editing mentor at the American Film Institute (AFI) and the Center for Art and Design in Pasadena, and has taught at the University of Southern California School of Cinematic Arts.

This April, Klingman was recognized at the American Cinema Editors (ACE) “Eddies” with a Career Achievement Award, reflecting her work on films like One Flew Over the Cuckoo’s Nest, A River Runs Through It, Hair, and War of the Roses.

Though Klingman is rightly proud of breaking into an male-dominated field through curiosity and persistence, she says that an aspiring editor today must approach the industry with knowledge of the technical world of the editing room, and must be determined. While far more cinema is being created, many more are eager to play a part.

The Department of Communication Arts congratulates Lynzee Klingman on her important contributions to American filmmaking, and her receipt of the 2021 ACE Career Achievement Eddie award.