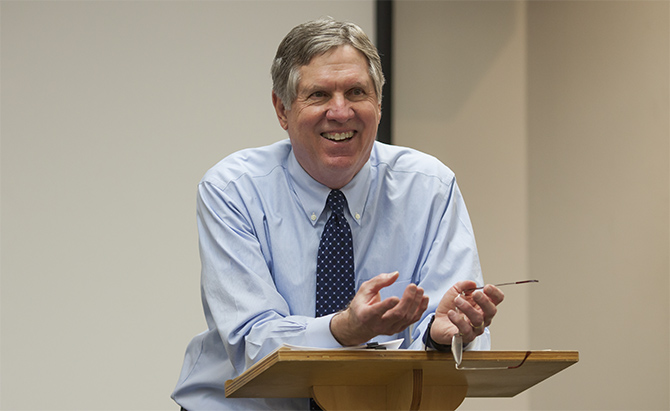 One can accomplish a lot in thirty-six years. In thirty-six years, Professor Vance Kepley wrote two books and about two dozen articles, all the while becoming a leading scholar on Russian and Soviet cinema. In that same timespan, he was chair of the Department of Communication Arts for several years, as well as director of the Wisconsin Center for Film and Theater Research for several more. Since 1981, Professor Kepley taught in the department, garnering the utmost respect and admiration from his peers, and leaving a lasting impact on the countless students who had the privilege of taking one of his classes. But thirty-six years is also a long time, and so, on May 4th, 2017, Professor Kepley taught his last class as a professor at UW-Madison.

The retirement of Professor Kepley means the department is losing a leader and a friend, one with a wealth of knowledge spanning far beyond his scholarly field of film. The weight of his contribution to the department and its community were palpable on April 27th as he delivered his final colloquium to the Communication Arts film cohort, and as his former students and fellow professors delivered speeches and stories about him at his retirement party held on May 5th. The resulting standing ovations at both events are a testament to Professor Kepley’s scholarship, friendship, character, and connection to Communication Arts.

Communication Arts is indebted to Vance for his many years of dedicated service to the department. We cannot thank him enough for everything he has done, but we can add another sendoff with kind words from his peers…

It has been a treasure to benefit from Vance during my time in this department. He knows how to lead, to instruct, to educate, to inspire—all without putting himself at center stage. It is fundamentally about his students’ ideas, not his. He demands they find their own answers to their questions, and he lets them make their own discoveries.

Vance Kepley is irreplaceable. We will miss his rigorous research on Soviet cinema and documentary, superb teaching, and elegant diplomacy.

I have tremendous admiration for Vance. As a faculty member, he was always held in high esteem by colleagues across the areas of the Department. His long stints as chair were not an accident. Vance’s influence on our graduate film program was enormous. Not only was Vance a first-rate scholar, but he was also a dedicated teacher who spent long hours mentoring both grads and undergrads. I feel incredibly lucky that my time here in Comm Arts coincided with his. His familiar laugh will be sorely missed around this place.

To me Vance is a mentor, a scholarly predecessor, and a model. Over the course of his long and impressive career, Vance has written two books and over twenty articles on Soviet film industry, theory, and practice in the 1920s, and he is a preeminent scholar of Russian cinema. My work on Stalin-era filmmaking in the 1930s to the 1950s follows directly on Vance’s footsteps and continues the line of inquiry he has established. I consider myself extraordinarily lucky to have studied under Vance. Much of what I know I know because of him.

With Vance’s well-earned retirement, a large part of the department’s leadership will walk out of the doors of Vilas. I will always remember his calm, patience, and collegiality through many a fiery faculty meeting. Vance and Betty are also consummate hosts, and Bruce and I look back with great fondness on pre-game cookouts at their house on crisp fall afternoons. He will be missed!

Vance’s contributions to the study of Russian and documentary film are immense, and his contributions to the department and the larger university are enduring. But even more important, the many radiant testimonials to his teaching should remind us that our primary duty is to our students. We should never forget that the university is not primarily run for the benefit of the faculty. Vance’s career remains a model of what really matters.