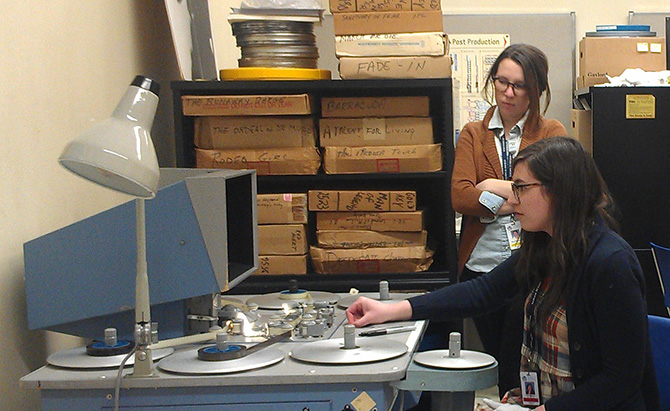 Our Department’s Wisconsin Center for Film and Theater Research (WCFTR) is justifiably famous for maintaining, in cooperation with the Wisconsin Historical Society, one of the world’s great film archives. WCFTR is also committed to the Wisconsin Idea of outreach, and a splendid incarnation of that mission is WCFTR’s participation in the Oneida Nation Film Preservation project.

The Oneida Cultural Heritage Department possessed hundreds of reels of local heritage films of which the specific contents were unknown, and the means to view the material was not available within the sovereign borders.  WCFTR archivists Amy Sloper and Mary Huelsbeck, working with talented student volunteers, are bringing their expertise to bear on the matter, carefully organizing and cataloguing the contents of this cinema legacy.  The reels have lived at WCFTR since 2013, with yearly deliveries of reviewed movies being brought back to Oneida community. The end product will be a report for the Oneida that describes the cataloging method used on the films and their contents.  The Oneida Cultural Heritage Department will review the report to determine which films to digitize in order to provide access to their community members.

This film project derives from an on-going native heritage project sustained by the UW School of Library and Information Studies.  This is the Tribal, Libraries, Archives, and Museums (TLAM) course, which is designed to facilitate a participatory learning experience through presentations, readings, service-learning projects, and personal contact with tribal cultural workers with a special emphasis on the tribal cultural institutions of Wisconsin.  WCFTR archivists have contributed to the course in the past, and it was TLAM instructor Omar Polar who first suggested that WCFTR could assist the Oneida in preserving their film heritage.

WCFTR is proud to be involved in the Oneida Nation Film Preservation project, and the staff is grateful for the opportunity to expand their notions of archival stewardship.  The venture would not have been possible without the existence of the TLAM course and its talented students and without the expertise and archival facilities of WCFTR.  Perhaps most important to the project’s success is the Oneida Nation’s willingness to entrust the WCFTR with such a valued piece of their cultural heritage.  This collaboration fully embodies the Wisconsin Idea.

Pictured: Molly McBride and Mary Kathryn Kwasnik, students in the Tribal Libraries, Archives, and Museums course, view reels from the Oneida Cultural Center at the WCFTR.