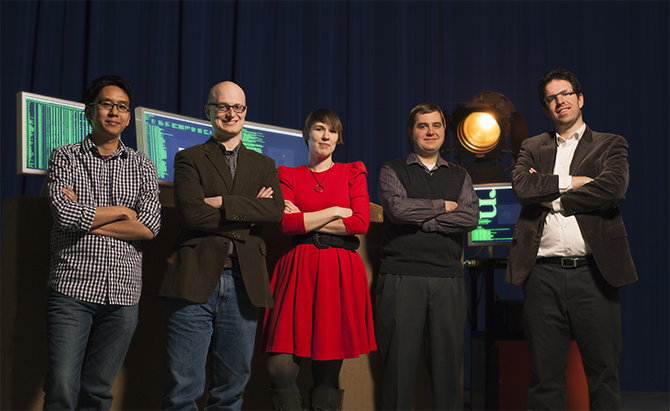 Professor Eric Hoyt has been busy. In the span of a week, two projects he spearheaded, Lantern and Project Arclight, have received an award and a grant, respectively.

The award comes from the Society for Cinema and Media Studies (SCMS) for Lantern: The Search and Visualization Platform for the Media History Digital Library. The 2014 Anne Friedberg Innovative Scholarship Award is one which recognizes “the best new scholarly work that exemplifies rigorous, interdisciplinary and theoretical inquiry into issues of vision and visuality.” Since Lantern is a responsive and flexible search and visualization platform for over 800,000 pages of digitized books and magazines, it’s no surprise that the award selection committee lauded the site for its “depth and utility, and in particular the smooth, almost tactile, page-turning browsing interface which effectively replicates the print browsing experience.”

Whereas Lantern is primarily about using keyword search along with visualization, Project Arclight is more about data mining, with a highly usable interface and visualizations to help interpret said data. Professor Hoyt says he and his team are “trying to push the field of media studies forward—how it thinks of digital technology and data research.” Through the Digging Into Data Challenge held by The Institute of Museum and Library Services, Project Arclight was one of three projects from sixty-nine applicants to receive the internationally-funded grant.

It is important to note that a lot of collaboration is responsible for the success of both Lantern and Project Arclight. Each project has indispensible resources; both utilize the Media History Digital Library, founded and directed by David Pierce and co-directed by Professor Hoyt. Additionally, Project Arclight will be working with researchers at Concordia University, Canada, and using the Chronicling America Library of Congress National Digital Newspaper Program. Lastly, each project has indispensible people; the team at the Department of Communication Arts is comprised of five individuals: the aforementioned Professor Hoyt, as well as Kit Hughes, Derek Long, Peter Sengstock, and Tony Tran.

When asked about the recent awards and the current status of the media projects, Professor Hoyt said that “While Lantern is already up and running, Project Arclight is just getting off the ground. It’s pretty exciting to have both clicking at the same time.”