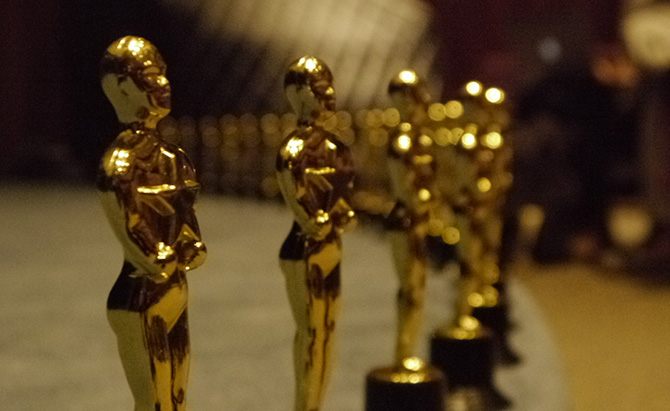 On the last day of lecture this semester, students in Eric Hoyt’s CA 155: Intro to Digital Media Production course walked out of the freezing cold and into an awards show.

The recipients of the Hoyty Award were selected by their peers. The day prior to the Awards, students screened their projects in their small labs and filled out ballots for the best video in their section. CA 155’s accountants (aka teaching assistants) tallied the ballots and concealed the names of the winners in white elegant envelopes. At the ceremony, the TAs announced the winners in their sections and handed out 6-inch Oscar-style statuettes. Each winning team gave a short acceptance speech, followed by a screenings of their video.

Before students could enter the Hoyty Awards, however, they had to walk the red carpet—or, more accurately, the “snow shoveled carpet” (see the video below). Standing in 10 degree weather, Prof. Hoyt greeted students entering the awards and asked standard awards ceremony questions. In response to the question “who are you wearing?,” sophomore Kelly Watson answered, “Calvin Klein and Target.” Actress Sharon Stone famously attended the Oscars wearing a mix of clothing from Vera Wang and the Gap. The next Golden Globes and Academy Awards are merely a few months away. Will Watson’s CK-Target pairing set off the newest awards show fashion trend?

Prof. Hoyt also asked students about the favorite project that they completed in the class. Interestingly, there was no uniform answer. Freshman Ryan Wall felt like he learned the most from the web design unit; sophomore Gregory Spicer liked the podcast assignment the best. Freshman Annakathryn Kruger felt like the group video project was the most satisfying. Exposing students to a broad range of digital media tools and forms, and allowing them to discover what find the most compelling, is one of the major goals of CA 155.

Invitations to the Spring 2014 edition of the Hoyty Awards will go out soon. But in order to attend, students need to be enrolled in CA 155: Intro to Digital Media Production. FORTUNATELY, CA 155 IS OPEN TO ALL UNDERGRADUATE STUDENTS IN THE SPRING AND NOT JUST FRESHMEN. Sign up now!