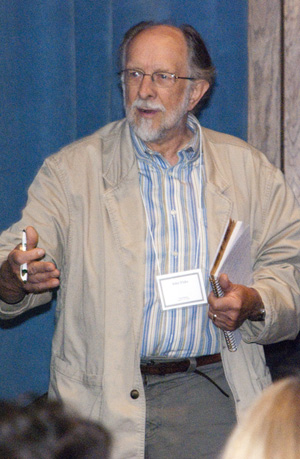 From the late 1970s through the 1990s, Department of Communication Arts Emeritus Professor John Fiske was one of the most influential media scholars in the world. Books such as Reading Television (co-written with John Hartley in 1978),Television Culture (1987), Understanding Popular Culture (1989), Power Plays, Power Works (1993) and Media Matters (1994) proved seminal to the developing fields of media and cultural studies. His work prompted generations of scholars to consider how media culture shaped our collective understanding of the operations of power, particularly in relation to issues of raced, classed, and gendered identities. And his work on reception led to intense debates over how to theorize the activity of media audiences. As a teacher and advisor, Fiske provided dynamic intellectual critiques of the work his students and colleagues produced, and encouraged an interrogation of the media environment that was remarkable in its accessibility.

Fiske retired from academic life ten years ago. To honor the tenth anniversary of Fiske’s retirement from the field, and to explore both the continuing impact of his ideas and the profundity of the era in which he and his contemporaries operated, a conference titled “Fiske Matters: John Fiske’s Continuing Legacy for Cultural Studies” was held in Madison in June, 2010. The conference featured Herman Gray, Henry Jenkins, and John Fiske himself as keynote speakers.

Given the dramatic changes that have occurred in our media culture in the decade since his retirement, one might wonder whether Fiske’s work remains relevant. Many media scholars believe it does, but also believe the field would benefit from a careful assessment of just how his ideas can help us better understand what’s going on in our current moment. Thus, the conference explored the continuing relevance of Fiske’s work and examined the intellectual heritage of and influences upon his work.