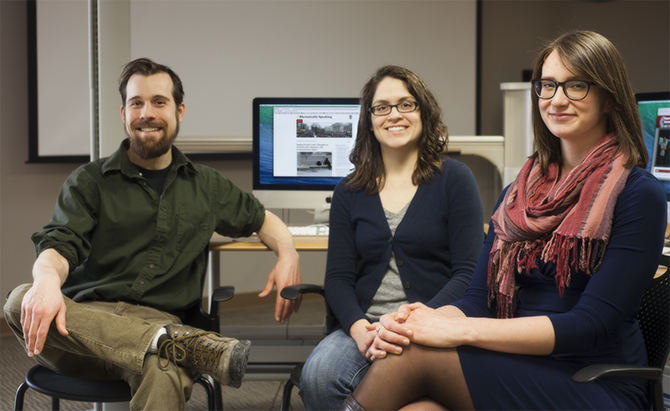 What is the importance of rhetoric? How does language affect our daily lives, ideas, beliefs, and behaviors? These are just some of the questions that the new blog Rhetorically Speaking hopes to explore.

The idea for Rhetorically Speaking stemmed from a casual conversation last spring between Whitney Gent and Professor Karma Chávez of Communication Arts, which led to the launch of the graduate student-run site in November, 2013. Gent said the main goal of the site is for it to be “accessible to and read by people who aren’t necessarily rhetoric scholars or in the academy.” She added, “It’s our hope, at least, that as people are reading it, they begin to appreciate rhetoric not just as an academic discipline, but as something that moves in the world.”

But making rhetorical analysis more accessible is no easy task. Olivia Conti, who is serving as editor for the first year, said there is a learning curve. She explained blog contributors have had to “learn how to speak in a more colloquial fashion [and] break down those concepts that we take for granted when we speak to an academic audience.” The site has allowed the scholars to practice their work in new ways, which is important to the site’s creators.

Another large benefit of publishing content with a blog is its timeliness. Whereas a journal article takes at least six months to get published, posting a blog entry takes a matter of seconds after the content has been written and edited. “Part of the goal is for us to be able to respond more quickly to current events and to give commentary that is meaningful,” Gent said. Additionally, Rhetorically Speaking gives graduate students in rhetoric a tool for professionalization. Traditionally, academic work circulates through conferences, journals, workshops, and some open-access online journals, but the blog enables contributors to reach a wider audience, and one that spans beyond the world of academia.

At its core, Rhetorically Speaking is run by the Rhetoric, Politics, & Culture graduate studies track in Communication Arts at UW-Madison. The site is managed by a blog committee of five graduate students including Olivia Conti, Whitney Gent, Brandi Rogers, Meg Rooney, and Casey Schmitt, with a rotating editor model and both graduate and faculty contributors.