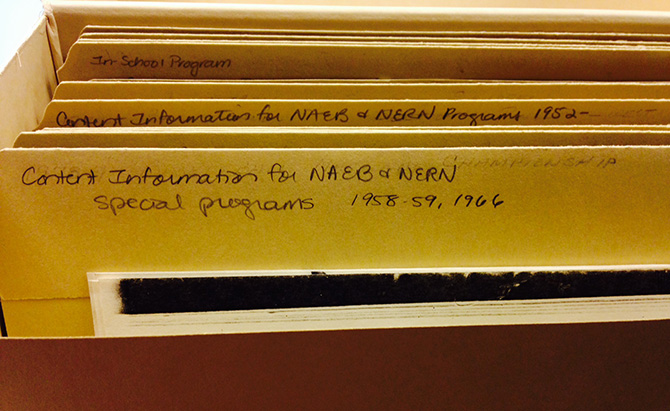 Decades before the creation of podcasts, TED Talks, and NPR programming, the National Association of Educational Broadcasters (NAEB) utilized radio technology to educate and inform the American public. The important and forgotten story of this organization will be told thanks to a $217,000 award from the National Endowment for the Humanities 2017 Humanities Collections and References Resources program.

The project, entitled Unlocking the Airwaves: Revitalizing an Early Public and Educational Radio Collection, is a collaboration between UW-Madison, the Maryland Institute for Technology in the Humanities (MITH), the Wisconsin Historical Society and University Libraries at the University of Maryland, with collaborative support from the American Archive of Public Broadcasting at WGBH/Library of Congress and the Radio Preservation Task Force. Eric Hoyt, an associate professor of media and cultural studies in the Department of Communication Arts, is a co-principal investigator of the grant, along with director Stephanie Sapienza of MITH.

Unlocking the Airwaves is one of 199 humanities projects the NEH, an independent federal agency and one of the largest funders of humanities programs in the United States, announced support of through $18.6 million in grants on April 9. The $217,000 grant will fund the creation of a comprehensive online collection of early educational public radio content from the National Association of Educational Broadcasters.

“The National Association of Educational Broadcasters innovated the American model of public media between roughly 1926 and 1967, and its researchers and affiliates were chosen to staff and build PBS and NPR in the late 1960s and early 1970s,” says Josh Shepperd, who received his PhD from the Communication Arts Department in 2013 and is collaborating with Hoyt and Sapienza on the project. “NAEB recordings provide valuable context into cultural, political, and less-studied, educational discourses going back to the New Deal, and associated documents help media scholars to trace the origin of script development, audience research, and genres that we associate with both public media and cable television – science, travel, food, history, and journalism programming.” Shepperd, who is now an assistant professor of Media Studies at the Catholic University of America, is one of the leaders of the radio preservation movement and serves as the director of the Library of Congress’ Radio Preservation Task Force.

The NAEB systematically preserved its history across over a hundred boxes of documents and 5,000 reels of tape. However, the organization split its archive, depositing its papers at the Wisconsin Historical Society and the recordings at the University of Maryland. Archival audiovisual media has been collected and maintained separately from other kinds of (primarily textual) archival sources, and these split collections mean that researchers must often discover and manually reunite audiovisual collections and their related materials if they want to understand a broadcast not just as an audiovisual object, but as a medium that relays information within a set of historical contexts.

Unlocking the Airwaves will reunite the split NAEB collections, develop an open and comprehensive web portal for them and tell the story of early educational and public broadcasting. Work on the grant will extend two and a half years, from May 2018 until October 2020.

From Hoyt’s perspective, collaboration was the most important factor to the team’s success in obtaining this highly competitive grant. “The project only works because we have the buy-in of multiple institutions, including our friends on the other side of University Avenue at the Wisconsin Historical Society.” In one especially serendipitous twist, the Wisconsin Historical Society’s State Archivist and Administrator, Matt Blessing, helped catalog the 112 boxes of NAEB papers years ago when he was relatively new to the archive. Hoyt also credits Michele Hilmes, emeritus professor of Communication Arts, with inspiring both Shepperd and him to investigate the history of educational radio. Hilmes wrote a letter in support of the grant, as well.

“Stephanie Sapienza, Josh Shepperd, Matt Blessing, and everyone else connected to the project understand what a remarkable organization the NAEB was,” says Hoyt. “Thanks to the NEH’s support, we can now get to work on communicating this history to researchers, students, and the general public.”