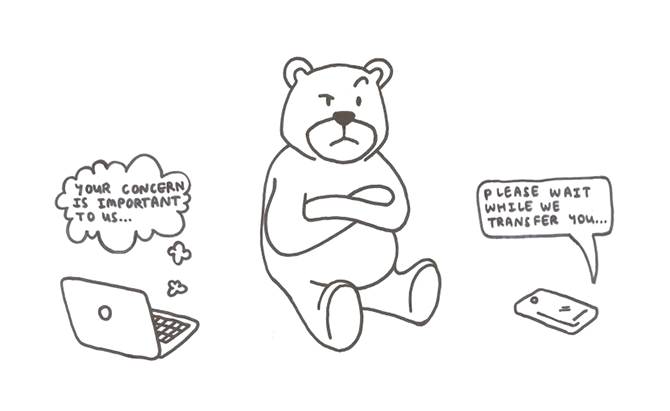 We’ve all been there: sitting at home or at work, phone to our ear, listening to the third, fourth, or fifth loop of smooth jazz music play over the line as we wait for customer service. After what seems to be an eon, a representative responds… only to immediately transfer us to someone else. The music resumes, and the rage begins.

For over the last decade, Customer Care Measurement & Consulting (CCMC) has conducted the National Customer Rage Survey to study the customer experience. The latest study had three main findings: 1) over 50% of households reported a problem with a product or service in the last year; 2) customer satisfaction with how their complaints are handled has not improved for decades; and 3) in many cases, companies have built disappointment into their complaint-dealing processes. The findings do not bode well for companies, which collectively spend billions on customer care.

In the past, CCMC simply released the findings from the study. However, for the latest survey conducted in 2015, President & CEO of CCMC Scott Broetzmann (BA, 1982) wanted to use videos as the centerpiece of the study’s release, to attach faces and stories to the Customer Rage data. As Chair of Communication Arts Partners (CAPS), the advisory and support group of Communication Arts alumni, Broetzmann immediately thought to produce the videos with Communication Arts students and staff.

In the spring of 2015, a production crew was formed including Broetzmann, staff members Erik Gunneson and Kaitlin Fyfe, and students Quinn Else, Nina Ham, and James Runde. After development, production took place during the summer months, with most filming occurring in July and August. Else and Ham shot independently or alongside Broetzmann in places like Arizona, Los Angeles, Chicago, Madison, and Milwaukee. Given the disparate locations, the crew often teleconferenced to keep communication open and productive. The result is a series of videos that give a voice to the Rage Survey.

Given the fact that the survey was sponsored by CCMC, the Center for Services Leadership at the W.P. Carey School of Business at Arizona State University, and Dialog Direct, and the videos were produced by Broetzmann and the Department of Communication Arts, it’s clear that the endeavor was a collaborative process. As the Chair of CAPS, Broetzmann said it is important to him to provide students with real-world opportunities. “That engagement, that collaboration is something that I feel a large responsibility for trying to do whenever possible,” he said.

Based on the responses from the students, the opportunity was beneficial:

Nina Ham, who co-directed and filmed the videos, said, “The biggest challenge of the Rage videos was finding the nerve to go out and talk to strangers about something that makes them angry. People don’t like to be accosted on the street, so we had a to find a way to creatively engage people. When we went to Milwaukee to do more interviews, Scott was so optimistic and dedicated that we ended up getting some really good material that I wasn’t expecting. We also got kicked out of the Brewer’s Stadium parking lot which was interesting.”

“I enjoyed the improvisational aspects of filming the Customer Rage videos,” said Quinn Else, who filmed and co-produced the videos. “Nina and I travelled to Phoenix and had to film interviews in unfamiliar places with very little preplanning. Being forced to make adjustments and troubleshoot on location proved to be a great learning experience.”

The animator, James Runde, even got a brand new experience by working on the videos. “[The project] was the first time I’ve ever done any serious animation for a video, and it was really interesting and gratifying to build a digital animated sequence from analog media… It was exciting to see it come together.”

The videos were released in November at the Arizona State Center for Services and Leadership Symposium to an audience of about 200 company executives. Of the contributors in Communication Arts, Broetzmann said, “I was simply amazed at how professional and skillful and artistic the team was, not only each of their independent contributions to the project, but their ability to work together as a team… and to produce something at that high a level is really remarkable.”

To learn more about the National Customer Rage Survey and view the videos, click here.