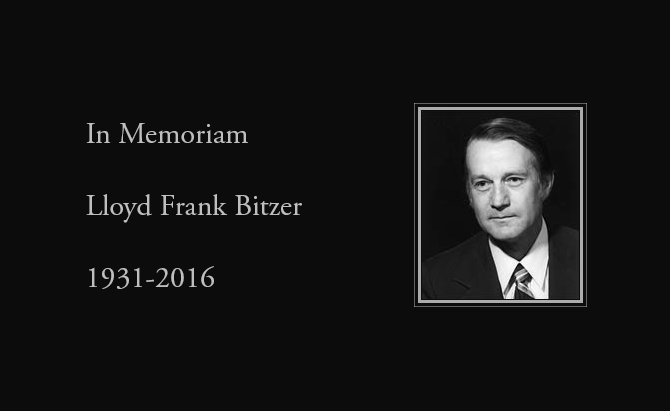 His scholarship was marked by a series of influential works, beginning with his 1959 essay revisiting Aristotle’s enthymeme. His critical introduction to the 1963 edition of George Campbell’s Philosophy of Rhetoric remains a touchstone in scholarship on eighteenth-century rhetorical theory. His editorship, with Edwin Black, of The Prospect of Rhetoric, published in 1971, set forth the proceedings of the Wingspread Conference that expanded traditional notions of rhetoric in newer, more interdisciplinary directions that reverberate to this day. His work in the 1970s on rhetoric and public knowledge adumbrated later scholarship on rhetoric and the public sphere, while his book on the 1976 presidential debates between Gerald Ford and Jimmy Carter demonstrated that a student of classical rhetorical theory had no shortage of insight about contemporary public address.

Above all these works, however, stands his classic essay, “The Rhetorical Situation.” Published in 1968, it was arguably the single most influential piece by a rhetorical scholar in the communication discipline during the second half of the twentieth century. Honored with the National Communication Association’s James A. Winans Award in 1969 and subsequently reprinted so often as to constitute a respectable CV in and of itself, it occupies a central place in the history of rhetoric as an academic discipline.

Lloyd’s other NCA honors included the Golden Anniversary Award for his 1978 essay “Rhetoric and Public Knowledge,” and selection in 1997 as a Distinguished Scholar. He served as president of NCA in 1976, as chair of the Department of Communication Arts at the University of Wisconsin from 1981 to 1986, and on major campus-wide committees throughout his career. On seven occasions he received grants from the National Endowment for the Humanities to lead summer seminars on rhetorical theory for teachers across the United States.

Many people, in many contexts, have echoed Isaac Newton’s observation that later generations stand on the shoulders of giants. Lloyd Bitzer is one of the giants upon whose shoulders we stand as scholars of rhetoric and public address.

His obituary can be read here: http://www.cressfuneralservice.com/obituary/168839/Lloyd-Bitzer/