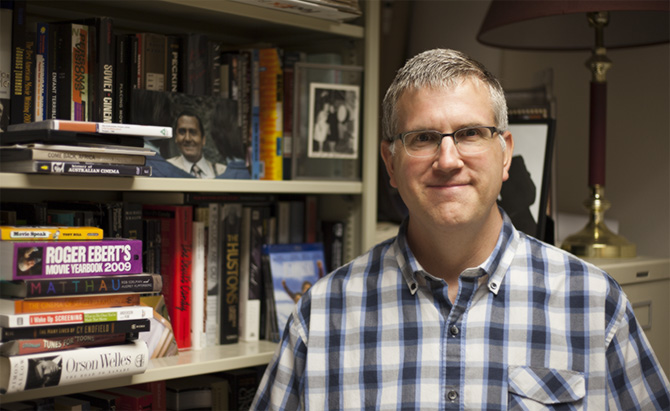 The UW-Madison Arts Institute annually grants six awards in a few categories including Arts Faculty Research, Arts Faculty and Staff Outreach, and Undergraduate and Graduate Student Achievement in the Arts. This year, Jim Healy, the Director of Programming for UW Cinematheque, is the recipient of the Joyce J. and Gerald A. Bartell Award in the Arts!

The Bartell Award, part of the Arts Faculty and Staff Outreach category, “recognizes and honors the achievements of UW-Madison faculty and staff across a broad range of activities and services in the creative arts including the areas of outreach, public service, and/or other enterprises involving the larger community.” Healy was granted the award for his work with UW Cinematheque, which provides free screenings of films year-round. In Healy’s case, he feels that “the extent of the outreach that the Cinematheque provides to the Madison community at large and not just the Academic community” went a long way in his selection by the UW-Madison Arts Institute.

The award includes $6,500 to be used for teaching, research, and public service activities. Healy has spent much of the funding this summer, putting it toward research for future Cinematheque programming, including its first 3D series coming in 2017.

“The money has allowed me to see more movies and travel a bit to look into the possibilities of bringing such a program to 4070 Vilas,” Healy said. “I also used the award to travel to Los Angeles where I recorded a commentary track with director Tony Bill for the upcoming Kino Lorber release of Bill’s 1980 movie My Bodyguard. It’s being released on September 6, I believe.”

Healy continued, “I’m very honored and touched by the award, especially since I view my primary responsibility as bringing great cinema to the community-at-large. The award has allowed me to be that much better at my job.”

UW Cinematheque brings another great season of film screenings starting today, August 26th at 7:00pm with Dressed to Kill (1980). Healy looks forward to seeing Mitchell Leisen’s movie Hold Back the Dawn (1941) (one of his favorites) on 35mm on September 18th, and that we shouldn’t miss October 20th when screenwriter Andrew Bergman will visit to present The In-Laws (1979).