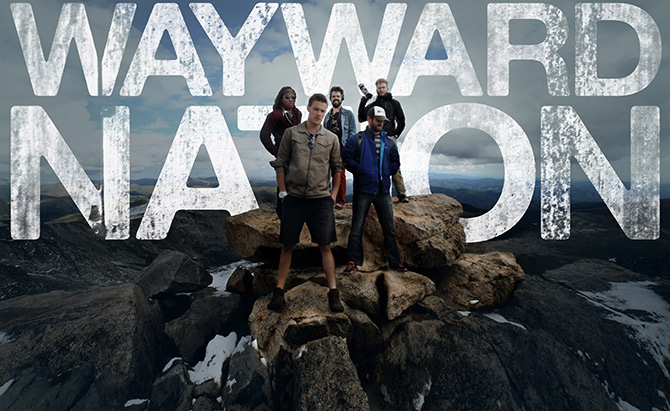 Eric Rusch (BA ’05) spent last summer touring the country to film his new show Wayward Nation. The show, co-hosted by Mikey McManus and Ethan Amarant, searches for young people across America who are changing the world in some small way. The first episode of the show aired on Ora.tv on September 3rd, which can be viewed here. This week, Eric Rusch was kind enough to answer a few questions about his experience.

The show seems invested in showcasing people with wholesome pursuits. Do you feel you have certain obligations as a storyteller, any guiding principles?

I don’t feel an obligation to showcase people with wholesome pursuits in every film, it just happened to be the form that Wayward Nation took as it developed. I do however have other obligations that guide my goals as a storyteller. The most important goal to me, as a kid that grew up in Appleton, Wisconsin, is to put people and places on film that aren’t usually addressed by the mainstream market. The majority of films take place in Los Angeles and New York. We have a national film industry that pays most of its attention to two cities. Whether it be fiction, documentary, or some combination of the two, I would like to continue to strive to tell stories about other places in the country. Sharing different life experiences is the heart of storytelling, and in the end storytelling is how we learn about each other.

The best part of creating the show was the year leading up to the experience. We had a small little office in a dingy part of Hollywood and a rotating cast of characters who were in and out contributing anything they could offer to make the show happen. There was excitement, fear, weirdness, and fun. The lights were on 24/7 and those who needed to rest went out and slept in their cars. We threw all of ourselves into it, and there’s nothing more exhilarating in life.

The hardest part was every step of the way. It’s fun, but it’s all hard. There are times that you’re deflated and wondering if it’s ever going to happen. There was always some element that was out of our control, funding, distribution, and even time commitment from our own crew. It’s a long process and you have to constantly adapt. Starting something is the easy part, finishing something is difficult. Unfortunately, no matter how good of an idea you have, finishing is the only thing that matters.

Can you speak to your Communication Arts experience, any fond memories in particular?

The obvious easy answer to this question is the first time I was handed a camera and was told to make a film, but I’m pretty sure everyone has that experience in Comm Arts. I have a fond memory of a seminar I took with David Bordwell. I was lucky enough to be in one of his summer sessions on Hong Kong cinema, and during the breaks he would take time to talk about any other film. I don’t remember what film we were talking about at this time, but in the conversation he became incredibly excited by describing a scene and eventually exclaimed, “it was f—ing awesome!” It may sound silly, but that really resonated with me. Here is an incredibly intelligent and articulate film scholar who built the foundation for film theory, and sometimes films are still just “f—ing awesome!” What I took away from this is that we can all over analyze and intellectualize our craft, but deep down we should never lose that original child-like excitement that brought us all to film in the first place. He clearly never lost that excitement, and I hope I never will either.

What impact did Comm Arts have on you, or what advice do you have for Comm Arts students?

I have two pieces of advice that I would like to give current Comm Arts students about their experience that will make them better filmmakers. The first one is to attend every single screening that’s available. I’ve never in my life before or after had such an opportunity to see film as my four years in Madison. The time required to just digest and enjoy film slips away so quickly. Seeing films from different countries and times informs your decisions and sensibilities. Take advantage of it now because you may never have that opportunity again.

The second piece of advice is that if you love filmmaking, and it’s what you want to do with your life, double down on it. I had so many classmates who were Comm Arts majors and “x major” as back up. I was a Comm Arts major and an Art major as a back up. It was the best decision I ever made. Unlike other departments and majors, production courses provide job training that will help you land jobs in the future. Spend as many days in the edit room as possible, and learn a hirable skill. I spent all of my time in edit rooms in college, and everyone in Los Angeles needs a good editor. I started as and editor and moved up from there.

Now that the show has launched, what are your next steps, or what projects are you planning for the future?

Who knows! We shot enough content outside of the web-series that we would like to eventually turn into a feature film of some sort. Other than that I have a number of other ideas, and now that I’ve been through the process, I’m going to pick very carefully. A real project is going to be a four year minimum commitment—it’s like a tattoo, you better be sure it’s the right one because you’re going to be living with it for the rest of your life.