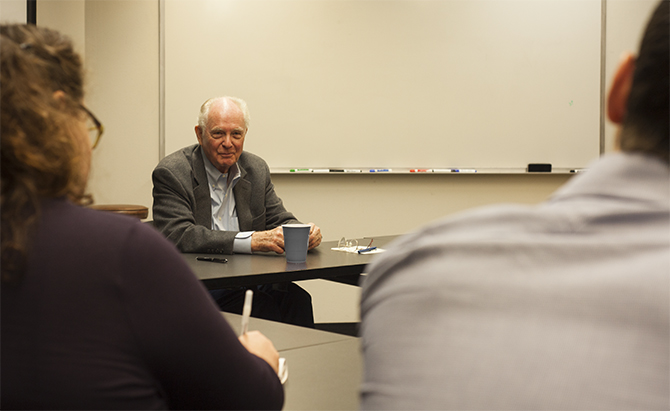 Bill Siemering is a Madison native who started his career right here at WHA.  He went on to WBFO Buffalo, where he started a cultural and public affairs program, “This is Radio!”.  Some WBFO producers went to Philadelphia where it was renamed “Fresh Air with Terry Gross.” Some years later, Siemering went to Philadelphia as vice president of WHYY-FM and helped develop “Fresh Air” from a local to a national program.

In 1967, when the Public Broadcasting Act opened up the first national public media sector in the US, Bill wrote an article — “Public Broadcasting: Some Essential Elements” — that won him an appointment to the founding board of National Public Radio, where he was tasked with writing its original mission statement. He was appointed as the first director of programming at NPR and played a crucial role in the development of All Things Considered, NPR’s flagship news program.

Bill later served as an adviser and staff member of the Open Society Foundation, working in Eastern Europe, Africa and Mongolia. In 1993, he received a prestigious MacArthur Foundation Fellowship.   He has also received a Lifetime Achievement Award from National Public Radio, an honorary doctorate from State University of New York at Buffalo, and the very first Lifetime Achievement Award from the Third Coast International Audio Festival. Most recently, he founded and serves as president of Developing Radio Partners, a group dedicated to bringing information on population, climate change, health, and governance to those who are hardest to reach, using the most effective media: radio and text messaging.

After the discussion with Siemering, Professor Michele Hilmes said, “The opportunity to speak to someone who played such an important role in shaping National Public Radio was terrific, for me and for our students.  Bill is an invaluable historical resource—and his current work in the field is fascinating, as well.”

If you’d like to read more about Bill’s early vision for NPR, as well as his philosophy on radio in general, here is an excellent essay on Transom: http://transom.org/2003/bill-siemering-part-1/