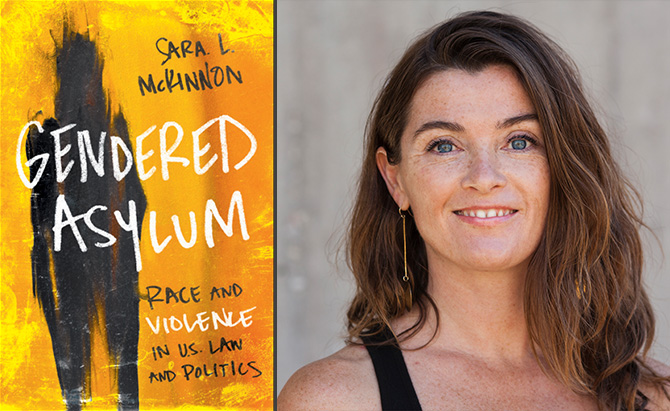 It is our great pleasure to share that Associate Professor Sara McKinnon is the winner of the Bonnie Ritter Book Award for her book Gendered Asylum: Race and Violence in U.S. Law and Politics.

The Bonnie Ritter Book Award in Feminist/Women Studies in Communication is an annual award first established in 2008, sponsored by the Feminist and Women Studies Division of the National Communication Association (NCA). The award recognizes Communication research related to feminism, gender, and women studies. The decision to select Gendered Asylum was unanimous among the award committee members.

“As a powerfully written and researched transnational feminist critique, Gendered Asylum offers an impressively layered analysis that takes at its center the question of how we understand the legal category of gender as it relates to asylum law and global violence against women,” one committee member wrote. They continued, “This book expertly weaves together diverse and complicated cases of asylum pleas to consider how U.S. legal decisions see (or don’t) gender as a relevant category worthy of unique protections.”

“In addressing one of the most urgent political issues of our time, Gendered Asylum: Race and Violence in U.S. Law and Politics is at once brilliant, timely, and urgent,” wrote author Adela C. Licona.

Bonnie Ritter was the main organizer for the group of women who formed the NCA Women’s Caucus in 1971. The success of the caucus later led to the establishment of the NCA’s Feminist and Women Studies Division, and subsequently the award was founded to honor “the courage, tenacity, and intellectual imagination of Professor Ritter and her colleagues.” Given Ritter’s legacy, it is clear how Gendered Asylum is a worthy recipient of this award.

Gendered Asylum was published on September 26, 2016 by the University of Illinois Press.