Scholar and filmmaker J.J. Murphy’s recent book, The Black Hole of the Camera: The Films of Andy Warhol (University of California Press, 2012), has been winning critical praise and stimulating interest in Professor Murphy’s own experimental film work.  Noted filmmaker John Waters really liked the book and cited it in his summer reading. Wheeler Winston Dixon, professor of film at The University of Nebraska-Lincoln, writing in Choice, called The Black Hole of the Camera “essential,” and concluded, “This is one of the best books on Warhol’s films to date.” 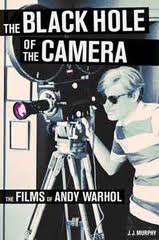 Murphy has been invited to lecture on Warhol in cities across the country in recent months, and in many cases his hosts used the occasion to highlight Murphy’s career as a filmmaker as well. He discussed his new book in conjunction with a screening of Warhol’s film Hedy (1966) in the UW-Milwaukee’s “Experimental Tuesdays” series, then returned the next week to present and discuss four of his own 16mm avant-garde films from the 1970s. Boston University’s Cinemathéque featured a program of Warhol’s and Murphy’s work, too, in a panel presentation with film historian and Harvard professor, Scott MacDonald.

The Houston Cinema Arts Festival is a five-day event that encompasses not only film on screen, but also live music and film performances, outdoor projections, and more. This year Murphy headlined its Rare Warhol event, which brought attendees to the Contemporary Arts Museum Houston to view The Andy Monument, a sculpture celebrating Warhol.  They then proceeded to a screening room where Murphy was on hand for a Q&A session as well as a screening of two rare 16mm Warhol films, Bufferin (1966) and The Velvet Underground in Boston (1967). Murphy also presented two of his own 16mm works, Sky Blue Water Light Sign (1972) and Print Generation (1973-4), which were recently restored by the Motion Picture Academy. In a review of the festival, Nancy Wozny wrote that, “Murphy’s seminal film, Print Generation, proved to be one of the most satisfying experiences at the festival.” To read more about J.J. Murphy’s work and recent book, visit his website: jjmurphyfilm.com.