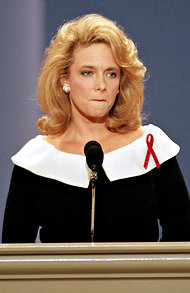 AIDS activist Mary Fisher is featured in  this New York Times article recalling her ground-breaking speech to the Republican National Convention in 1992.  According to Comm Arts Professor Stephen Lucas, her address, titled “A Whisper of AIDs,” is “as elegant a speech as any in the top 100.”  He should know, as co-editor of “Words of a Century: The Top 100 American Speeches, 1900-1999,” which includes such landmarks as “I Have a Dream” by the Rev. Dr. Martin Luther King Jr., “The Four Freedoms” by Franklin D. Roosevelt and “A Tale of Two Cities” by Mario Cuomo.  Prof. Lucas and his co-editor, Martin J. Medhurst, surveyed 137 scholars of rhetoric to establish the list.  As Prof. Lucas is quoted in the Times:

“She is dealing with a really gritty subject that revolves around a sexually-transmitted disease and people dying horrible deaths, and the language is uplifting,” he said. “And then she delivers it in this pristine, clarion kind of way in which her voice cuts through the convention, cuts through the myths and stereotypes regarding AIDS. She has what she sees as a profound truth, and she wants to bring it to the audience.”