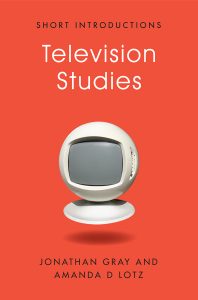 Comm Arts professor Jonathan Gray has published a new book that provides an overview of the academic field of television studies, including a survey of the discipline’s origins, central ideas, and key thinkers and works. The book, co-authored with Amanda Lotz of the University of Michigan, is suitably titled Television Studies and is included as part of the publisher Polity’s Short Introductions series. The volumes in this series are designed to offer broad yet concise overviews of the main areas of the social sciences and humanities. A sub-field of media studies, television studies continues to grow in popularity amongst media scholars and undergraduate students alike, though it is still a relatively young field as academic disciplines go, only developing in the 1970s and 1980s. On the one hand, Television Studies the book is highly suitable for undergraduate students in introductory television courses. On the other hand, it works to describe and define the field itself, outlining the different methods available for the academic study of television and summarizing the key issues and debates that have concerned television scholars.

As Professor Gray explains, “Amanda [Lotz] and I had noted that a lot of books try to work as textbooks for television studies without actually saying what television studies is, where it came from, and how it works. So, part of our task was to create something of an intellectual genealogy, connecting the dots between different strands of research within the area, so that readers could get a sense of how it all comes together.” The book, then, is equal parts a how-to guide for studying television critically and an intellectual history of the various ways television has been studied within universities and other scholarly institutions.

When asked about the process of writing Television Studies, Professor Gray added, “Perhaps the most fun in writing the book for me was getting an excuse to have several long chats with television studies pioneers about what went on, and why and how ideas developed. Indeed, between those chats and reading the constantly evolving, wonderful work of younger scholars innovating and driving television studies into yet more new areas, I gained such a renewed appreciation for the strength and vitality of television studies, the questions it asks, and the nice people who work in it.” Professor Gray joined the Comm Arts department in 2009 in the Media and Cultural Studies area. His research examines how media entertainment and its audiences interact, and how and where cultural value and meaning are created. In addition to Television Studies, he has single-authored three books (Watching with The Simpsons: Television, Parody, and Intertextuality, 2006; Television Entertainment, 2008; Show Sold Separately: Promos, Spoilers, and Other Media Paratexts, 2010) and co-edited three collections on topics ranging from fandom to satirical television programming. In addition, he has published numerous journal articles and book chapters, co-edits Popular Communication: The International Journal of Media and Culture, and blogs at both Antenna: Responses to Media & Culture and The Extratextuals.