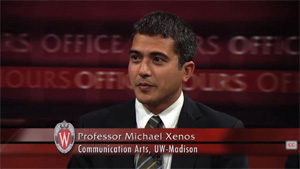 Professor in Media & Cultural Studies Jonathan Gray and Professor in Communication ScienceMichael Xenos examined the expanding role of political satire in today’s news coverage on the Big Ten Network’s news interview program “Office Hours”. Gray and Xenos discussed television programs such as The Daily Show, The Colbert Report, and The Simpsons, as well as radio shows like The Rush Limbaugh Show and saterical newspapers such as The Onion in their discussion of satire.

“Office Hours” is a half hour weekly talk show on the Big Ten Network hosted by University of Wisconsin-Madison Political Science Professor Ken Goldstein. The show is produced by University Communications and the guest selection, research, and writing is done by Goldstein’s upper level political science class Political Communication: Theory and Practice. The show brings in guests from all across the UW-Madison campus to talk about what they are doing to make a difference, from unlocking the DNA of the common cold to investigating stem cells.

“There’s a famous belief that young people are getting their news from The Daily Show. In my research, its not so much from the show itself, but its really an interaction effect between watching the show and having some other content added to the mix.” 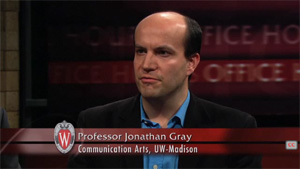 “Sometimes we see the word infotainment and we think that its information that’s been invaded by entertainment, but it also works the other way and sometimes entertainment gets invaded by information. For example, dramas like Brothers and Sisters and The West Wing.”