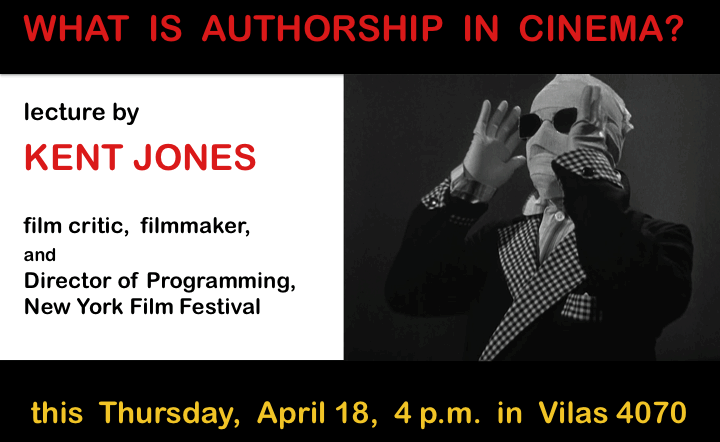 Kent Jones will be in Madison this Thursday, April 18, giving a talk entitled “What is Authorship in Cinema?” at 4 p.m. in Vilas Hall 4070. Jones is a prominent film critic and filmmaker, and holds an important place in American film culture as Director of Programming for the New York Film Festival. Emeritus Professor David Bordwell will introduce him.

Jones has worked with Martin Scorsese over the years on a number of acclaimed documentaries. He co-wrote and co-directed the Emmy-nominated and Peabody Award-winning 2010 film, A Letter to Elia. He also wrote Scorsese’s survey of Italian cinema, My Voyage to Italy, and wrote and directed the 2007 film Val Lewton: The Man in the Shadows, which Scorsese produced and narrated.

In Q&A, Jones will be happy to respond to questions not only about his talk, but also about an array of topics to which he brings an informed perspective, such as the current landscape of film criticism, the nature and function of film festivals from a programmer’s point of view, the ups and downs of collaboration, and so on.