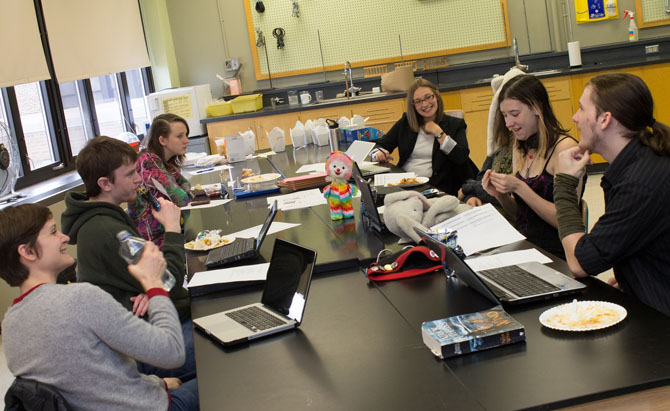 Each year, the Center for the Humanities provides graduate students an opportunity to take their work in academia into the Madison community. Through the Public Humanities Exchange Program, partnerships are created that reflect both the needs of the community organization and the students’ research interests.

Last spring, Ashley Hinck, a PhD student in Rhetoric, Politics, and Culture in the Communication Arts Department, was awarded a $1250 grant to work with students at Shabazz Alternative High School in Madison. Hinck’s own research focuses on how activism can be influenced by fandom, in particular, how the Harry Potter Alliance uses their fandom to promote political and civic action. For this project, Hinck charged students with creating a fan activism campaign based on a current political or social issue. Using the popular BBC science fiction television series, Doctor Who, the students chose to tackle the issue of global warming. Students created a blog called Companions Against Global Warming where they wrote posts and created videos and memes encouraging Doctor Who fans to take a stand against global warming.

According to Hinck, “The project was a huge success. By the end of the semester, I think students came to see popular culture as relevant to citizenship and began to feel empowered as citizens as a result of their experience with media like Doctor Who.” She recalled, “At the last meeting, students were already brainstorming ways they could continue the project after the grant was over and ways they could expand their website. I think this means we have a set of very engaged citizens ready to create some major change in global warming policy.”

Since going live, the blog has received over 100 hits and has gotten support from a number of Doctor Who groups, including the Tin Dog podcast, the Mad Men With a Box podcast, and the Doctor Who Bookclub.