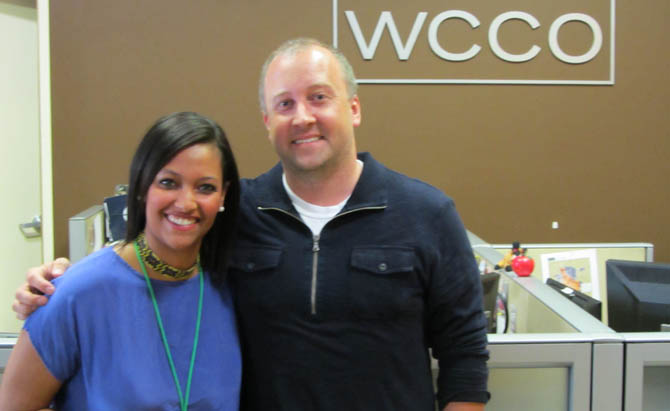 What did you do last summer? Communication Arts major and budding television news reporter Elsa Robins, for one, was hard at work, building up her on- and off-camera experience and setting the stage for her post-graduate career in broadcast journalism. Elsa, a senior who is set to graduate in Spring 2013, interned for 12-weeks in the news division at WCCO-TV, a CBS station in Minneapolis-St. Paul, Minnesota. There, she participated in a range of activities from shadowing reporters and photojournalists on location to learning the ins-and-outs of a television news studio: editing footage, reading a teleprompter, fielding tips and researching stories. She was even given the opportunity to pitch story ideas during meetings and write her own versions of stories.

It turns out that Elsa, a native of River Falls, Wisconsin, wasn’t the only Badger in the WCCO-TV newsroom. She found herself in the company of two UW-Madison alums: executive producer Matthew Liddy (BA, 2001) and reporter Rachel Slavik (BA, 2004). They formed an instant bond through their shared alma mater. “It was very nice to have those UW connections throughout my internship,” says Elsa. Their presence helped her feel at ease in the unfamiliar, fast-paced environment of the newsroom, and they have remained in contact ever since – contacts that will surely benefit her on the job market this year. Elsa worked on the news assignment desk close to Matt’s and described him as bringing a “warmth and joyfulness to the newsroom.” She shadowed Rachel in the field, an experience that remains memorable in more ways than one. “Working with her was great,” Elsa says. “I will always remember going out on my second story in the field with Rachel, as it was a tragic, fatal story about a 12-year-old girl getting hit by a car on her bike. Rachel was very helpful and encouraging, and very professional. It was extremely beneficial for me to watch Rachel in those difficult moments, so that I could learn how to handle similar situations in my future career as well.”

Apart from a wealth of new knowledge and professional contacts, Elsa left the Twin Cities with another very valuable resource: a professional film reel that demonstrates her on-location reporting and anchor abilities. While shadowing stories in the field, WCCO-TV allowed her to film her own versions of a number of news stories, including President Barack Obama’s June 2012 visit to the Twin Cities, local citizens’ reactions to the U.S. Supreme Court’s “Obamacare” ruling, and a pair of tragic stories about a triple homicide and the fatal bicycle accident. She wrote the scripts and edited the footage of these stories herself – drawing on skills, such as knowledge of Final Cut Pro video editing software, that she credits to her education in Communication Arts production classes. She also recorded an anchor read that simulated anchoring a live newscast. “During my anchor read I had to continue telling the news even if any mistakes were made,” explains Elsa, adding, “This was great hands-on experience for me.” She’ll be able to use this reel (viewable here) as a calling card to send out to news directors as she applies to positions throughout her senior year, with the hopes that she’ll have a job lined up prior to graduation.

Elsa, who is also currently a news anchor, reporter, editor, and engineer at UW-Madison’s student radio station WSUM, says she aspires to be a reporter or anchor for a national network someday, such as CNN or NBC. She’s particularly interested in joining a program like The Today Show that mixes breaking news stories with entertainment reporting. “I know that I am shooting pretty high,” she admits, “but my father always taught me to set high goals for myself.” Based on Elsa’s diligent work ethic, passion for the news profession, and charming personality – you can see some additional examples of her reporting here and here – getting a great television news job after graduation that’ll bring her one step closer towards those goals shouldn’t be a problem at all. Best of luck, Elsa!