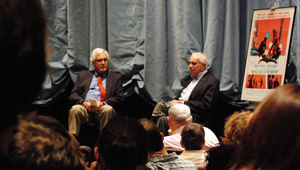 The Department of Communication Arts was pleased to host a special event to honor distinguished University of Wisconsin – Madison alumnus Walter Mirisch (History, ’42). Over 100 guests from the Department and campus recognized and learned about Mr. Mirisch’s many achievements.  Among campus leaders in attendance were:

Communication Arts Chair Sue Zaeske and Dean Sandefur welcomed guests and thanked Mr. Mirisch for his support of the Department and the College. Emeritus Professor Tino Balio then hosted a discussion with Mr. Mirisch which reviewed his fascinating career. After graduating from UW-Madison (History, ’42), Walter Mirisch launched a brilliant career as a film producer that eventually spanned 60 years. He produced such popular hits as The Magnificent Seven, Some Like It Hot, and thePink Panther films.  As head of the Mirisch Company, he garnered three Academy Awards for best motion picture in the course of his career (The Apartment, West Side Story, and In the Heat of the Night). Mr. Mirisch was awarded the University’s Honorary Doctorate in 1989. He recently published his autobiography with UW Press, I Thought We Were Making Movies, not History. Mr. Mirisch has been a long-time friend and supporter of the of Communication Arts and UW-Madison. His gifts to Communication Arts made possible the creation of the Mirisch Seminar Room (3155 Vilas Hall), a state-of-the-art teaching and conference room (pictured below). He has also served for many years on the College of Letters & Science’s Board of Visitors and has been active in alumni outreach on the west coast. The reception provided the Department of Communication Arts with an enjoyable opportunity to convey a message of thanks.