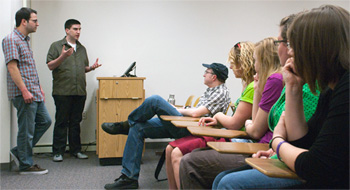 Department of Communication Arts alumni Adam Horowitz (’93) and Eddy Kitsis (’93) reflected on their rise from aspiring writers to executive producers/writers of ABC’s hit network drama Lost. Speaking to a group of about 50 Department of Communication Arts students, faculty, and staff in Vilas Hall, Horowitz and Kitsis explained how they met in their Comm Arts 355: Introduction to Media Production class in the early 90s and ran into each other again after moving to Los Angeles. They began their careers as unpaid interns and assistants in Hollywood, where they were often required to perform mundane tasks. While performing such duties during the day, Horowitz and Kitsis worked odd jobs at night to support themselves financially, all the while writing screenplays in their free time.

Eventually, one screenplay was passed on to Hollywood talent agent Ari Emanuel (whom the character Ari Gold is based upon from HBO’s Entourage), and Horowitz and Kitsis signed with Emanuel’s talent agency. Thus began their collaboration, which produced TV scripts for shows such as Popular, Felicity, and One Tree Hill, and culminated with the fanatical popularity of Lost. Horowitz and Kitsis’ have now wrote their first movie screenplay, TRON Legacy, the sequel to Disney’s 1982 cult film TRON, which is to be released in December 2010.

Horowitz and Kitsis then took a wide-range of questions from the audience. Most wondered about the upcoming series finale of Lost, and while the duo remained tight-lipped about specifics, they did believe that viewers of the show would find closure. “It’s odd to us that so many people get angry about all the unanswered questions inLost,” Kitsis quipped. “If you read a book, you don’t get angry if the writer doesn’t reveal everything in chapter three, right?” Horowitz also believed the unique, collaborative nature of Lost’s writing process has translated to TV and is part of what has made the show so popular with viewers, a sentiment Kitsis echoed. Both Horowitz and Kitsis stressed the importance of identifying what you are passionate about if you want to succeed in Hollywood, and making sure you are open to “paying your dues” as an assistant or intern before becoming successful.

During Horowitz and Kitsis’ visit to Madison, they alsospoke to students at Hillel, covered by the Badger Herald and Madison’s WKOW-TV 27 news in an interview and short news segment.