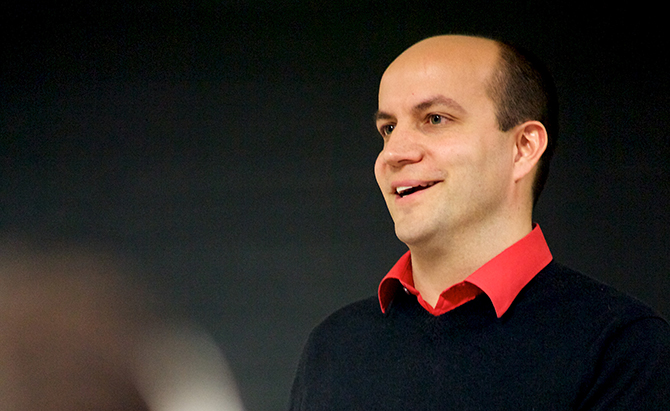 Communication Arts Professor Jonathan Gray is one of the Chancellor’s Distinguished Teaching Award recipients in 2015!

Jonathan Gray has been a Media & Cultural Studies professor at UW-Madison for the past six years. He has taught CA 451 – Television Criticism, several seminars, and will soon be teaching CA 458 – Global Media Cultures, among others. He is also a prolific researcher and writer.

“I feel my research game is pretty good, but teaching is something that rarely gets talked about as though it’s a comparable achievement. It’s nice that the University has these awards, and it’s really flattering to get one,” says Professor Gray.

“Jonathan has immense enthusiasm for his subject, which he communicates to his students and gets them excited about how media operate in our lives,” says fellow Media & Cultural Studies Professor Michele Hilmes.

That enthusiasm is obvious when Professor Gray speaks about his teaching approach. “When I was a student I was always amazed at how many classes I took on topics that I didn’t think I cared about at all that I ended up adoring because the professor adored them… and so I’ve tried to model after that… I really try to come in with energy and adrenaline, leave all the sort of garbage outside of the class, and treat the class as something unto itself.”

Each year, Professor Gray makes it a point to adapt to the specific needs of his new students, as he says every group is different. Just because teaching a course one way worked really well the previous semester doesn’t mean it will work well the next time around.

His approach is also rooted in being genuine, and as a scholar who is always trying to learn more, he thrives on his interactions in the classroom. “I like the fact that it’s not just what I’m learning in the library or from reading books, but I’m constantly learning from what my students are saying and the sort of questions they ask.”

Susan Zaeske, Associate Dean of Advancement, Arts and Humanities in the College of Letters & Science, says, “What we have observed in having him here on campus is a consummate teacher full of intense energy and creativity… Professor Gray not only loves his subject and excels at presenting it, but also he genuinely cares about his students’ experience and growth.”

Professor Gray is one of six esteemed professors to receive the award this year:

The award ceremony was held on April 29th, and the awards were presented by Chancellor Rebecca Blank and Provost Sarah Mangelsdorf.