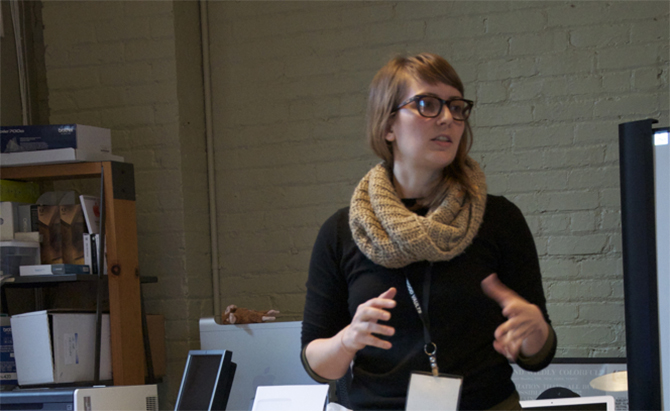 The Wisconsin Center for Film and Theater Research is pleased to announce the appointment of Amy Sloper to the position of the Head Film Archivist. As the WCFTR Film Archivist, Amy will oversee the Center’s rich collection of films and television episodes, nearly 20,000 titles in all. Her duties will also include teaching one course annually in archival theory and practice in the UW School of Library and Information Studies. Amy succeeds Maxine Ducey who retired from WCFTR in January.

Amy brings excellent training and experience to the position. She earned her undergraduate degree in the Communication Arts Department, with a concentration in Radio-TV-Film. While at UW, she was active in the film committee of the Wisconsin Union Directorate and served as the programming advisor in 2004. She earned her masters at UCLA in that university’s excellent degree program in Moving Image Archive Studies. Since 2007, Amy has been the Assistant Film Curator at the Harvard Film Archive in Cambridge, MA. Throughout her career, she has regularly participated in such professional organizations as the Association of Moving Image Archivists and the Society for Cinema and Media Studies.

Amy is scheduled to begin her service at the Center on April 28. Her colleagues in Communication Arts and the Wisconsin Historical Society look forward to welcoming Amy back to campus to launch her WCFTR career.