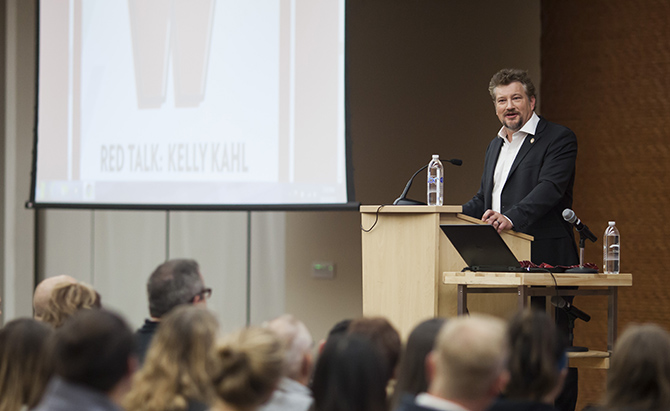 On Thursday, October 19, Kelly Kahl was one of four recipients to receive the Distinguished Alumni Award from the Wisconsin Alumni Association. The award, first established in 1936, is the highest honor bestowed by the Wisconsin Alumni Association, which only presents the award to the “most prestigious graduates of UW-Madison for their professional achievements, contributions to society, and support of the university.”

Kelly Kahl has worked for CBS for over two decades, overseeing primetime program scheduling with a keen understanding of the trade, helping the network to lead in viewership for fourteen of the last fifteen seasons. In May of this year he was promoted to President of CBS Entertainment, and in doing so achieved a longtime professional goal of leading a television network. Few people reach this level of success in their career and yet Kelly Kahl has, through years of hard work and experience, deft savviness, and in his own words, “a bit of luck.”

But Kahl’s professional achievements encompass only one part of why he is a distinguished alumnus. A 1989 Communication Arts graduate, Kahl is someone who consistently gives back to UW-Madison. He is a member of the Communication Arts Partners (CAPS) alumni board, contributing his time, ideas, and more to improve the well-being of the Department of Communication Arts and its students. Over the last decade, he has also annually offered summer internships at CBS for undergraduates, giving students the opportunity to work in the industry and gain insight from him in the process. To establish an internship is already beneficial to students, and to be actively involved with them when they arrive goes above and beyond what most people would expect from someone in Kahl’s position at CBS.

When Kelly Kahl visited Madison last week, he attended a whirlwind of events over the course of a few days that all speak to his character. He received the Distinguished Alumni Award, he joined fellow CAPS members to help DJ a two-hour radio broadcast block at WSUM, he delivered a RED Talk to hundreds of students interested in his story and what it is like working in the entertainment industry, he attended a lengthy CAPS meeting and a Comm Arts event to honor his recent achievements, and finally, ever the devotee to all Wisconsin sports, he cheered on the Badgers at Camp Randall as they beat the Maryland Terrapins on Saturday.

Sean Hanish, a filmmaker and one of Kelly Kahl’s longtime friends, calls Kelly “the quintessential Badger,” and we could not agree more. Few people are as deserving as Kahl to be recognized as a Distinguished Alumnus.